Kore Asian Media’s 16th annual Unforgettable Gala, presented by BMW and hosted by Jeannie Mai, was truly a night to remember on Saturday at the historic Beverly Hilton in Los Angeles.

The annual Asian American awards and entertainment event, which has the distinction of being the longest-running one of its kind, celebrates trailblazers whose contributions to the arts and entertainment influences generations and begins conversations. This year’s honorees were in particular those who dared to break free from the confines of stereotypes to create their own paths to success.

Now more loudly than ever, the Asian American community has found its voice in an industry in which they have long fought against issues that range from pay inequality and whitewashing to typecasting.

“We’ve always been a silenced group. We never really spoke out against things. The fact that that’s changing, it doesn’t have to do with the fact of who’s starring in movies, it has to do with the people who are speaking out,” Awkwafina said. The musician, comedian and actress will next be seen in “Crazy Rich Asians” and “Ocean’s Eight.” “I think right now we really owe it to the political community, the online community, who spoke out against whitewashing and things that are ordinary in typical Hollywood.”

Q, who currently stars in ABC’s “Designated Survivor,” encouraged dreamers in her speech. “Despite circumstances, where you come from or what your parents think about the art that lives in you, find it, explore it. It doesn’t matter what anyone knows about your worth, it matters what you think about your worth,” she said.

Jimmy O. Yang, who plays fan-favorite Jian-Yang on HBO’s “Silicon Valley,” was in the crowd. “It takes a certain belief to go against your parents on what is a normal job. Hopefully the next generation of Asians coming up will think acting and entertainment is a viable career. That’s huge in itself, if there are more people who are trying to put their voice out there — whether it’s stand-up, improv, acting, screenwriting. The talent pool needs to get bigger and that’s what’s important.”

BMW’s Ultimate Drive Award recognized Kim and Park as talents who have exhibited the “ultimate drive” in their careers. “Many of you know me, this year especially, as a voice of inclusion,” Kim, who executive produces ABC’s ratings hit show “The Good Doctor,” said during his speech. “It’s safe to say it’s part of the reason I’m here tonight. Inclusion, diversity are all very popular buzz words and extremely important. But what I challenge everyone in this room to do is move beyond the notions of being included — to lead. Let’s not simply fight for inclusion, let’s set our bar higher.”

“Our strength comes from connecting with other brothers and sisters out there in an industry that made us be pitted against one another,” said Nam, who will return to HBO’s “Westworld” in the spring. “We’re told there’s room for only one Asian role, or one open ethnicity, one token voice on the board, on the team, or behind the camera. This event proves that theory wrong because all of you here have been pioneers in your work space. I’m only here because you all refused to accept it, to accept these limitations.”

“If your work is commensurate to other people’s work, then you should demand equal pay and equal rights,” said journalist Lisa Ling, host of CNN’s “This Is Life with Lisa Ling.” “The biggest lesson I want to convey, the most important advice to Asians out there, is to stand up for yourself.”

The night wasn’t just about fighting the good fight — it was also a night to celebrate and enjoy. Dance group Kinjaz gave the first performance of the night, followed by the East West Players, the longest-running theater of color in the country, who performed a medley from the musical  “Allegiance.” Epik High, one of South Korea’s top hip-hop groups, rolled their turnable onto the stage and led the crowd out of their seats and onto their feet. Michelle Lee treated the crowd to a surprise performance. Grammy-winning singer Judith Hill closed the night with a powerhouse performance showcasing the vocals that had once caught the attention of the legendary Michael Jackson.

“It’s just so cool to see all my Asian heroes, all my friends, people I look up to from my culture, all here celebrating the same thing,” Yang said. Up-and-coming actress Lana Condor agreed. “An event like this for us, it shows the world that we have a lot to offer, not just stereotypes.”

“We are honored to be able to return with this gala, and to celebrate inspiring individuals in our community, year after year,” said Linda Ngay, event director at Kore Asian Media. “Our award recipients come from diverse backgrounds, tell diverse stories and are influencing a whole new generation of young people. Unforgettable is about the Asian Pacific American community’s growth, in the past and in the future, and about unifying our myriad voices in a time when, more than ever, we are being heard.”

The trailer for “Bali: Beats of Paradise,” an upcoming film by director Livi Zheng and executive producer Julia Gouw, premiered during the event. “Bali: Beats of Paradise” is a documentary about gamelan, Indonesian traditional music that has been used in major Hollywood films such as “Avatar” and “Star Trek.” The film is set to be released in theaters next year.

Missed the event? View the live stream on the Kore Asian Media Facebook page, and visit unforgettablegala.com for more information on the event. 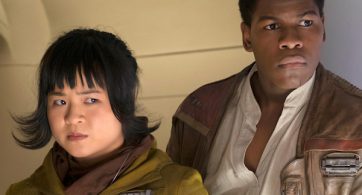 The world is buzzing in anticipation for “Star Wars: The Last Jedi” to arrive in theaters next week, and we’re more curious than ever — what’s the story behind […]