Margaret Cho reflects on All-American Girl, 20 years after its primetime debut on ABC.

In the history of network television, ’90s sitcom All-American Girl faded in and out faster than a thumbprint on a Hypercolor T-shirt.

But for people who looked like me, it was monumental.

On the evening of September 14, 1994, Asian Americans from coast to coast sat in front of their TV sets and held their breath as the opening credits appeared and a spunky Margaret Cho walked down a staircase in a ripped denim jacket and feathered bangs, while talking like a Valley Girl on a Zack Morris-style cordless phone. Collectively, we murmured to ourselves, “Please don’t let this show suck.”

ABC billed the show as based on the comedy of Cho, a then-25-year-old rising star on the stand-up circuit, loved (and sometimes hated) for her loud, raucous and unapologetically crude routines. (“I wanted it to be called ‘The Margaret Cho Show’ because I am such a f-ckin’ egomaniac,” she said onstage before the pilot aired.)

But The Margaret Cho Show it wasn’t, and that may have doomed the series from day one. Instead of inspiring laughter, All-American Girl mostly brought looks of confusion. Critics panned the show for its bad jokes, stereotyped characters and banal storylines that endorsed, rather than shattered, ethnic myths. The show’s ultimate cancellation after 19 episodes sent Cho into a spiral of depression and drug addiction, as detailed in her 2002 autobiography, I’m The One That I Want.

Twenty years later, Cho, 45, has gained perspective on the experience, and with the progress in the media and society over the past two decades, holds high hopes for Fresh Off The Boat—a new ABC sitcom based on Eddie Huang’s bestselling memoir about growing up as a hip-hop loving kid in suburban Orlando. It’s the first network TV show since All-American Girl to be centered on an Asian American family.

Cho talks with KoreAm about All-American Girl and what it meant for Asian Americans, who almost never saw faces like theirs on TV. Perhaps writer Philip W. Chung summed it up best when he wrote in a 1994 Los Angeles Times column: “The most incredible thing about the series is that it even exists.”

Where were you in your life just before All-American Girl?
I was doing stand-up comedy, and I was traveling a lot and working a lot. I was still really young, but I wanted to become an adult, and comedy was what I thought would be the fastest path to adulthood, and it really was. I never thought about the overreaching kinds of things like race and identity. I just wanted to get out of the kind of environment that I was living in. I didn’t want to do what my family expected of me. I wasn’t going to school at the time, so that was already, like, amazingly weird and brave for an Asian American.

How did the show come about?
TV networks were giving development deals to stand-up comedians. There was a lot of that happening, a ton more than now.

Did you have much creative control?
No. No. I didn’t know how to get that, and it was never offered to me.

What did you think when you first read the script?
I thought it was really too much of a kids’ show, and it wasn’t really what I did as a stand-up comedian. They had understood me as a performer wrongly. But I wanted the show to be on the air, so I wanted to be whatever they wanted me to be. For me, this could be job security in an industry where you never know if you’re going to work again. So I just wanted to do anything to make sure the show would happen. I didn’t feel like I had the choice to argue for what I needed.

As the star of the first Asian American family sitcom on network TV, the pressure must have been immense.
I was alone in the situation. Nobody had any advice for me. I couldn’t ask anybody because nobody knew what I was going through. I was the only person who had ever done this. I had nobody who could tell me what the right move was. I was too young to understand what to do or how to deal with it, and everyone just wanted to get a show on the air. And people didn’t realize that having the first Asian American family on TV comes with a lot of cultural baggage that needs to be addressed.

And to top it off, you were criticized for your weight. (In I’m The One That I Want, Cho wrote that she was forced to lose weight rapidly—30 pounds in two weeks—which led to serious kidney failure.)
That was a major thing that came up with the initial camera tests. But it had never come up throughout the development process, and it wasn’t until we were very close to shooting that I heard that complaint. It’s a really terrifying thing to be told, “Well, you don’t qualify for this job that you’ve been a part of all this time because you’re too fat.” I have a feeling, though, that it really wasn’t about my weight. Why wouldn’t they have said something much earlier? I think they just didn’t know how to photograph Asian faces. Asian American faces, at that point, were so foreign, and they didn’t know what to do with people who were different.

When the show aired, what was the reaction from the Asian American community?
The reaction was very mixed. A lot of the younger people were excited about it because it was the first time they saw Asian Americans on TV. That’s a really big deal. Other people were angry that it wasn’t what I normally did as a comedian. And I think other people were, like, waiting to be offended by the show, but were more offended by the fact that I was chosen to do that role. My comedy is much more edgy than anything I would do on mainstream television, and my move toward mainstream television was somehow considered an offensive thing.

People were also concerned about whether you were “too Asian” or “not Asian enough.”
The weirdness of being the first Asian American—I guess, for lack of a better word—star, is that people are constantly judging you. They’re asking, ‘Where do you fit on this idea of who we are?’ With ethnic identity, there’s a right way to be and a wrong way to be, and that’s a really weird thing. The panic comes from not seeing Asians Americans on television, so the few images we do have of them become overly scrutinized.

If you’re coming into visibility, you’re the first person to write the story, and it’s very hard to do that first. What is your identity if you’ve never seen yourself before? How do you carve it out of nothing? That’s a really challenging thing as a performer.

What the All-American Girl did was point out that we are invisible. You don’t understand invisibility until you realize that you’re not invisible anymore. It absolutely was more important than just television or just entertainment. We’re talking about this idea of visibility versus power in society. It’s a huge, huge thing.

In the past 20 years, how have media portrayals of Asian Americans changed?
There still is a lot of invisibility. But it’s better. Certainly, it’s better. There are many more Asian American characters, and the entire industry has expanded exponentially. There are so many television channels and so much more media, including online, and everything that we didn’t even have before. Now people can sort of enjoy [shows with Asian Americans] for the comedy itself, and the humor comes from this organic place. It’s a good thing.

What are your thoughts on the next Asian American family sitcom, Fresh Off The Boat?
I love what they’re doing with Fresh Off The Boat. It’s really funny, the cast is really talented, and the writing is really strong. I really love Eddie Huang’s point of view and perspective. His humor is close to what I would want to do if I were to create a show. It’s like, how do you figure out who you are when you don’t see yourself out there? Here’s a kid who does just that. He finds himself. I think that’s really powerful.

Eddie and I have been in really close contact since the show started, and I feel like, oh my God, my experience actually is really valuable here. I’ll tell him things I wish I had known. What people are buying, in his brand and his image, is identity. His fans want to see themselves in him. This show can be an extension of that, so I think I’m helping him understand his importance, even though I didn’t understand mine at the time.

(ABOVE) The cast of All-American Girl; (BELOW) the cast of Fresh Off the Boat, based on Eddie Huang’s book, to premiere in 2015 on ABC.

What’s new in your life?
I’m working on standup. I’m doing a new record and a new tour that I’m about to go on the road with. I’m back to doing what I really love.

How do you ultimately feel when you look back on All-American Girl?
In the end, I was really grateful to have done it. It really helped me understand a lot more about show business. When re-watching the episodes, I totally forgot some of the stuff that had happened because we were immersed in it. I was just trying to survive within the work of it. I just wanted to keep it going. I wanted to stay alive.

The cast was very close. I’m still friends with all of the actors. B.D Wong and Jodi Long, I see more often.

I’m really grateful for the effect that it had on people who grew up watching it. For a lot people, it was the first time that they saw Asian Americans on television, and that’s really cool. I feel like it did accomplish a lot. It didn’t do exactly what I thought it was going to do, but in a lot of ways, I think it did more. It was a good way to grow up. 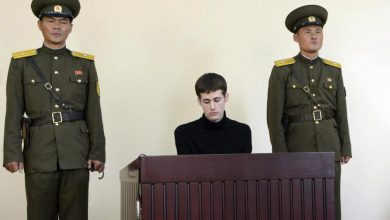 by REERA YOO Matthew Todd Miller, one of the three American detainees currently held in North Korea, was sentenced to six years of hard labor for committing “hostile acts” […]