For the 15th year, the Unforgettable Gala brought a night filled with laughs, performances and memorable moments inside The Beverly Hilton on Saturday.

The annual event, which for the first time was live streamed on Kore Asian Media’s Facebook page, celebrates top Asian American influencers in the entertainment industry, as well as trailblazers across all fields.

George Takei was honored with the Icon Award for his influential life and career. Digital influencers Anna Akana and Buzzfeed’s Eugene Lee Yang, as well as his Sulu heir John Cho, presented Takei with the award. Cho greeted him with a big hug. “I want to thank George for always using his prolific platform and in turn risking to speak out when he has seen injustice,” Cho said of George. “In this way, George, you have never been a model minority.”

In between awards, guests were treated to a variety of acts including performances from singer Kina Grannis, K-pop artists Dean and Eric Nam, K-pop boy group Boys in Groove (B.I.G), several stage acts from the East West Players theatre troupe and a dance number from Chris “Stahyl” Gatdula of Team FreeStahyl and the Jabbawockeez.

Hosting the event was television personality Jeannie Mai, who had a little help from her pseudo co-host and mom Mama Mai. Helping keep Mai’s “turnt” atmosphere was the night’s beverage sponsor Johnnie Walker, which kept its Blue Label flowing all night.

Other sponsors included BMW of North America, which presented the event and had the i8 flagship car on display (along with several other models); title sponsor M&L Hong Foundation; and gold sponsors Pechanga Resort & Casino and Private Internet Access.

If you missed the event, you can catch it streaming on Viki next week.

Check out photos from the gala: 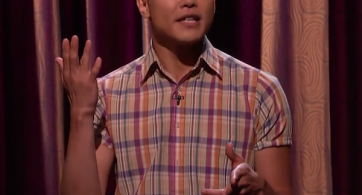 Comedian Joel Kim Booster is working on a new show for Fox, loosely based on his life. The network put into development the single-camera comedy “Birthright,” which is written […]