With all of the entertainment world celebrated at The 47th People’s Choice Awards last night, the API community was not forgotten. Multiple Asian and Pacific Islander creatives and projects took home awards for their contributions to the industry in 2021.

The annual fan-voted awards show aired on NBC on Dec. 7 and saw various API actors, films and musicians winning in the 40 different categories that span across the entertainment industry. Dwayne “The Rock” Johnson won three different categories, notching two awards for his appearances in “The Jungle Cruise” (Male Movie Star of 2021 and Comedy Movie Star of 2021). Johnson rounded off the night by receiving the People’s Champion Award, surprising fans during his acceptance speech by gifting his award to a Make-A-Wish recipient in the crowd.

“Shang-Chi and the Legend of the Ten Rings,” meanwhile, swept through the action categories, winning The Action Movie of 2021 over heavy-hitters like “No Time to Die” and “The Suicide Squad.” Simu Liu also won The Action Star of 2021 for his starring performance as Shang-Chi.

On the small screen, Mindy Kaling’s “Never Have I Ever” won The Comedy Show of 2021, beating out the final season of “Brooklyn Nine-Nine” as well as “Saturday Night Live.” International projects also received recognition at the awards ceremony, with the South Korean Netflix series “Squid Game” winning the title for The Bingeworthy Show of 2021.

The API community not only won in TV and film categories; musical acts also took home plenty of accolades. Olivia Rodrigo received major awards for her debut album, “Sour,” which won Album of the Year, as well as Rodrigo herself landing the Best New Artist of 2021 recognition. K-pop superstars BTS, meanwhile, dominated music categories with a win for The Group of 2021, also winning The Music Video of 2021 and The Song of 2021 categories with their song “Butter.”

You can read the full list of winners here. Congratulations to all, and here’s to more AAPIs taking home trophies in 2021! 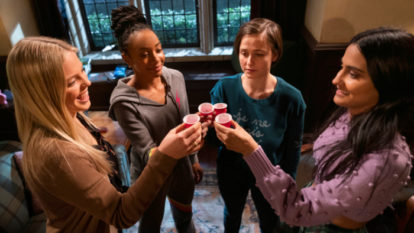 Mindy Kaling’s fresh college dramedy is getting another season.