Growing up as a Chinese American adoptee raised by a white family gives a whole new meaning to the question, “but where are you really from?” It’s a perspective that non-transracial adoptees are unable to fully grasp, but as the saying goes… If you know, you know.

Many people might think of adoptees as having won the lottery of life. But sometimes it can feel like quite the opposite. Yes, we are grateful for what we have gained through our adoption, but at the same time, we have lost the chance to grow up knowing our culture, language and birth family.

This is a problematic question for more than one reason. We know what you’re referring to, but our real parents are the people who raised us and the ones who are there for us. Finding birth parents is a complex, hot-button topic in the adoption community because it is so unique to each situation, involves multiple moving pieces and sometimes unexpected outcomes.

A casual conversation can quickly turn into a series of awkward assumptions. First of all, guessing someone’s Asian ethnicity is a questionable practice in and of itself but assuming that a person speaks another language when they have been raised speaking English is a different story. Some adoptees may have had access to learning their birth language, but, don’t jump to conclusions.

4. “Do you remember anything?”

This is just another way of asking how old we were when we were adopted. Some adoptees may feel comfortable sharing this with you, and others may not want to talk about it. Whether we tell you, “I was 10 months old and I don’t remember anything” or not, respect our decision.

5. “I was expecting someone else.”

They may have not said it in these exact words, or any words for that matter, but the sentiment is still there. As someone with a Jewish name, I get this at least twice every school year. In high school, a substitute teacher tried to pronounce my name with a German accent and then proceeded to say it was the most German name he’s ever heard—it’s Ukrainian! You can bet that I hesitated to raise my hand for attendance.

Feeling conflicted about our identity is nothing new to us. But who says we have to choose between our heritage and our nationality, when we can fully be both? Being a Chinese American adoptee is just one perspective within the Asian American experience and there are so many aspects of our stories that haven’t been told. 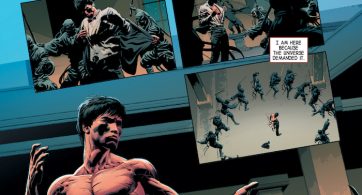 The Marvel Cinematic Universe is about to get way more Asian. Rumors are stirring that casting calls have begun for “Shang-Chi,” the first Marvel movie to feature a Chinese […]