For Mother’s Day, we’re toasting our favorite API mothers and maternal figures on the small and silver screen. With mamas from the groundbreaking “Joy Luck Club” to the hilarious new series “PEN15,” here’s our rundown of awesome API mamas in film and television.

All the mothers of “The Joy Luck Club” have a special place in our hearts. The four leading ladies of showed us the tender, vulnerable hearts behind the hardnose facade of our Chinese mothers. This movie is certainly responsible for an untold number of tearful mother-daughter movie nights.

2. Tia Carrere as Nani Pelekai from “Lilo and Stitch”

Nani Pelekai is not a biological mother, but she becomes a mother to her younger sister, Lilo, and a furry, blue alien. Throughout “Lilo and Stitch,” Nani is warm, loving and supportive of her little sister, even though she sometimes struggled with parenthood. And who can forget the iconic quote: “Ohana means family, and family means no one gets left behind or forgotten.”

3. Constance Wu as Jessica Huang in “Fresh Off the Boat”

No-nonsense, tough love Jessica Huang is prime time television’s tiger mom. Jessica doesn’t roll with the punches, she throws them. You know the school of hard knocks? She’s the headmistress. Plus, her iconic pimp dance is a move for the ages.

Mrs. Kim is one of the best characters on television today, and not just API-centric television. Endearing but headstrong, Mrs. Kim charms with her determination and wit, and she’s able to string along her family for just about any plan she thinks up.

6. Rachel House as Tala from “Moana”

“Moana” broke into the film scene as the first Disney feature to focus on a Pacific Islander narrative. Tala, Moana’s loveable grandmother, taught her granddaughter and viewers to forge their own paths even in the face of great adversity.

Bex Mack suddenly found herself in the role of a mother, in the aftermath of an earth-shattering family secret. Despite her young age, she handles difficult situations with grace and a good sense of humor, helping her daughter navigate everything from strict dress codes to boy trouble. 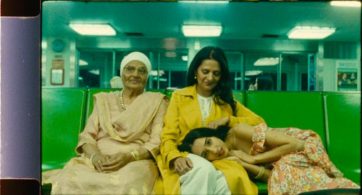 Do you ever feel like you love your Mama so much you could just sing about it? On May 10, R&B singer songwriter Raveena dropped a new single, “Mama” […]