Food documentaries and docuseries can be both educational and enjoyable to watch, especially when hosted by personalities who bring a bit of lightheartedness to the table. Notable chefs bring deep appreciation for food culture by taking on the larger questions such as: Where does our food come from? What is the relationship between social justice and food? And what are the foods that have shaped the American food scene today? On the other hand, some simply enjoy traveling the world to taste as much food as they can. Whatever your preference, these seven food documentaries and docuseries with Asian leads will help educate you, challenge you and make you laugh all at the same time.

“ULAM: Main Dish” is the first food documentary to chronicle the rise of Filipino cuisine in America. Directed and written by Filipino American Alexandra Cuerdo, it has received worldwide distribution with Gunpowder & Sky and has won awards at many film festivals, including the 2018 Los Angeles Asian Pacific Film Festival and 2018 SFF Film Festival. The documentary follows celebrated Pinoy and Pinay chefs and restaurateurs who explain their journey to bringing their home flavors to American tables, in hopes of making Filipino cuisine “the next big thing.” Some of these chefs include Alvin Cailan (Eggslut), Chase and Chad Valencia (LASA), Johneric and Christina Concordia (The Park’s Finest) and Nicole Ponseca (Jeepney). The success and fulfillment of these honorable chefs are metaphors for the belief that “ultimately, the key to everyone’s heart is through their stomachs,” as stated by one of the featured chefs. Watch now on streaming platforms like Hulu and Amazon Prime.

Utilizing food as a way to explore unresolved social justice issues such as food deserts, food waste and sustainability, this docuseries uncovers the truth behind American food systems. Celebrated Korean American chef and entrepreneur Roy Choi explores various food destinations within his hometown of Los Angeles. Choi himself is no stranger to hardship, and as someone who has experienced some of the issues the series addresses, such as living in the streets, injustice, addiction, hunger and wealth disparity, he can relate to many of the people he encounters throughout the show. “Broken Bread” is more than just a typical food show. “This is a food show about our food systems and how they affect our livelihood,” Choi explains in an article on “Bon Appétit.” Watch the series on TasteMade, Amazon Prime, KCET or PBS.

Padma Lakshmi is a well-renowned Indian American chef, cookbook author, host and executive producer who has a particular interest in immigration politics. As an immigrant, Lakshmi has firsthand faced the challenges of being a foreigner to a new land. According to an article in “The Atlantic,” the show was initially supposed to focus on immigration alone, but Lakshmi discovered that food was a more intimate way to connect with the communities she wanted to investigate. From scouring the streets for authentic chop suey with actress and comedian Ali Wong, to cooking an original family recipe of Indian dosas at home, Lakshmi explores the food culture of America’s diverse immigrant groups, discovering the origins of flavors that have shaped America’s food scene today. Sarine Roma, executive producer and co-director of the show, explains to the “Chicago Tribune” that food can be political. “We’ve tasted food from all over the world, but when you actually stop and think about how that food got here, it tells a much larger story of America,” she says. Watch “Taste The Nation” on Hulu.

Harry Yuan and Bruce Aguirre first met as rock climbing partners and later took their “bromance” to the next level by hosting the food docuseries “Day of Gluttony.” In each episode, Yuan and Aguirre stay true to the definition of “gluttony” by choosing one food-centric city and taking on the challenge of eating 24 meals at 24 restaurants within 24 hours. In an interview with “Northwest Asian Weekly,” the dynamic duo explains that the most difficult part about shooting within a 24-hour-cycle isn’t eating 24 meals, but finding 24 places to eat. Watch as the pair munch their way across various cities across the continent, showing audiences both the challenges and joys of gluttony. Watch the series now on Hulu, Tastemade and Amazon Prime.

With episodes reaching millions of views on YouTube, this #1 most-watched BuzzFeed web series fearlessly takes on the uncomfortable question of whether or not the price of your food matters. Does a $129 order taste better than $3 take-out? What’s the difference between $9 noodles and $94 noodles? In each episode of the docuseries, Steven Lim and Andrew Ilnycky try different foods at three different price points: affordable, mid-tier and luxury. At the end of every episode, the pair then decide which one was the most “worth it.” Watch the series on Hulu, YouTube, BuzzFeed and Amazon Prime.

David Chang, the founder of luxury noodle bar Momofuku, is a James Beard Award-winning chef who has been featured on the covers of magazines such as “Forbes Life” and “Time.” Chang now hosts “Ugly Delicious,” a new docuseries in which he explores various restaurants and homes around the world, looking for the meaning behind each savory mouthful. According to a review from the “New Yorker,” “The show isn’t about what food is, it’s about what it means, and about the choices people make that change its meaning.”  Watch the celebrity chef as he traverses comfort foods, cultural fusions and more on Netflix.

Founder of LUCKYRICE, a company that creates digital content to curate and showcase diverse Asian cuisines and cultures, this Taiwanese American is a “Chief Executive Dumpling.” Danielle Chang hosts “Lucky Chow,” a docuseries in which she explores Asian cuisine with her new co-host William Li. In the series, Chang encounters Asian-Americans across the continent, telling stories about different foods and the rich Asian heritage behind them. “If we are what we eat, then we’re all just a little bit Asian,” says Chang. With season four just released in May of this year, watch the docuseries now on PBS. 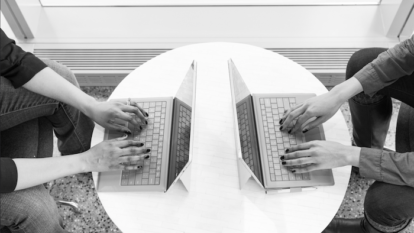 The #ChallengeAccepted trend is the latest addition to online activism focused on empowering women. By posting a black-and-white picture, tagging a few women in your Friends list and adding […]