Years of toiling on primetime television are finally paying off for Sandra Oh. After winning a Golden Globe for Best Actress for her role on “Killing Eve,” the former “Grey’s Anatomy” star became the third Asian woman to host “Saturday Night Live.”  After learning to “toot her own horn” with a little help from “SNL” regular, Leslie Jones, Oh introduced the night’s round of skits by unapologetically declaring “I’m Sandra Oh, and I’m hosting Saturday Night Live!’”

One day, self-conscious teenager, Trent (Mikey Day) gets a magical gift: a peek into his future. But what he foresees in his love life is not exactly what he had hoped for. In “Future Self,” Oh flexes her inner-gangsta muscles as Tishy—the crude, loudmouthed, girlfriend of the 25-year old version of Trent. Why is he dating this odd woman? Well, because she’s “got the goo-goo!” Plus, that can of Four Loko and artfully-placed chest tattoo can’t hurt either.

In this bit of office humor, Oh plays the coworker of slightly-perverted, 85-year old Louise (Kate McKinnon), who wants nothing more than to see her office mates lock lips for her birthday. After a rousing, inspirational speech about the power of a kiss that dramatically ends with faking her own death, Louise gets her wish.

Being a substitute teacher is a nightmare. But the sub (Oh) in this sketch is faced with a unique problem: every one of her students keeps answering her SAT prep questions with a painfully long, dramatic soliloquy. At her wits end, Oh breaks down into her own emotion-packed, TMI speech detailing her failing marriage and unfulfilling career. I guess teens aren’t the only ones with deep and complex lives. Yikes.

After sharing a delicious brunch with a friend, there comes the inevitable question of how to split the bill. Options like Google Pay or Venmo might seems like the obvious choice, but what about something with a little bit more drama, flair and a hint of murder and deceit? Try a “Cheque.”

We’ve all been on the receiving end of a really bad excuse. But can you imagine hearing that someone was two hours late because they were the victim of a hate crime? Would you believe that person if they were former “Empire” actor, Jessie Smollet? In “Network Meeting,” Oh deals with just that conundrum. She is not amused, to say the least.

Oh channels all the drama, pomp and circumstance of a Jane Austen novel in “The Duel” as a woman who has to deal with two blushing admirers dueling for her affections. But surely an errant bullet cannot be as painful as the anguish a man experiences who is forced to share his love for a woman. Love must be like a bullet to the brain…

We’re all dying to see what’s in the Mueller report and North Korean dictator, Kim Jong-un and his translator (played by Oh) are no exceptions. Upon hearing news bulletins that there may have been no evidence of Russian collusion, Kim goes to Russia to confront Putin himself. Because what kind of leader would Putin be if he actually wasn’t involved in the U.S. election? Certainly not one Kim wants to be involved with. 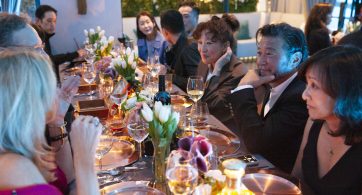 I’ve been publishing this magazine for 29 years when it was just for Koreans. I have learned to evolve with the times. And it’s about time that our name […]