Oh, baozi. Perhaps best known for the appearances they make from steaming dim sum carts, there’s a lot more to these Chinese buns than meets the eye.

Baozi are hot packages of chewy dough packed with a variety of scrumptious fillings and traditionally steamed in a bamboo basket. These buns’ origins can be traced back to ancient Northern China, when wheat was the most important source of grain and calories in a Northern Chinese person’s diet. In the harsh northern climate, rice was virtually impossible to cultivate and had to be imported from the South.

Legend says these buns were first invented by a Chinese general hoping to cure his army of a vicious plague, which might or might not be true. What is more likely is that the army decided baozi was the easiest way to get soldiers the carbohydrates and protein they needed in one convenient, edible package that could be taken with them on-the-go. Think of them as the original MRE.

Today, baozi is still considered a convenient staple breakfast food in Northern China and is commonly served as a side dish at dim sum in the South. However, many variations of these steamy buns can be found throughout East and Southeastern Asia, where they are served everywhere, from the most upscale restaurants to the local convenience store.

Here’s a short list of some of the best ways to enjoy these Chinese steamed buns this winter:

Transcending beyond being just a snack, baozi can be very hearty and served as a meal entrée. Savory baozi can be filled with almost any ingredient imaginable, but the most common fillings for savory baozi are pork or vegetables. The most well-known version of the savory baozi is arguably the char siu bao — a fluffy baozi jam-packed with sweet, tender char siu pork. Plus, if you’re in a rush and happen to be in Taiwan or Japan, you can grab a ready-to-eat baozi at most 7-Elevens.

Originally a Fujianese creation, and therefore a Taiwanese delicacy, gua bao is like a freestyle remix of the OG savory baozi. Sometimes lovingly referred to as a “Chinese hamburger,” these buns are split open and filled with sweet, braised pork belly, crisp, pickled mustard greens, a sprinkle of coriander, and a healthy dash of ground peanuts. Much like an ambitious younger sibling, this offshoot of the original baozi has many variations of its own like kimchi or fried chicken gua bao.

Kaya baozi is one of those cool examples of how history can leave an indelible impression on the foods we enjoy. When Chinese immigrants took up residence in Malaysia, they used local ingredients to fill the insides of their baozi. Kaya baozi are filled with kaya — a sweet, custardy jam made with egg, coconut milk, and pandan.

This Japanese version of baozi is strikingly similar to its Chinese counterpart, but differs  in some key ways. Unlike their da (big) bao brethren, nikuman are much more modestly sized and are seasoned to please a Japanese palate. One of the most popular types is  kare-man, a curry bun which usually has a turmeric-yellow skin and a delicious curried pork filling. Yum!

Much like the kaya baozi, this variation of the steamed bun was brought to the Philippines by Chinese immigrants. In the Philippines, siopao is a popular street food that is commonly filled with bola-bola  — a minced, meatball-like mixture of pork, beef, chicken and brined egg.

Shenjian bao, aka shenjian mantou, is like the underappreciated, tiny sibling of the tang bao. First steamed and then fried until crispy in a screaming hot skillet slicked with a light layer of oil, these Shanghai baozi are filled with a piping-hot, soupy liquid and a helping of ground pork and minced green onions. Though they differ a little in appearance from traditional baozi, they’re made using the same semi-leavened dough. These thick-skinned bad boys usually have a crispy, flat bottom and bedazzled with a healthy dose of sesame seeds. They’re notoriously rich, so it’s recommended to pair them with a dash of vinegar and ginger. 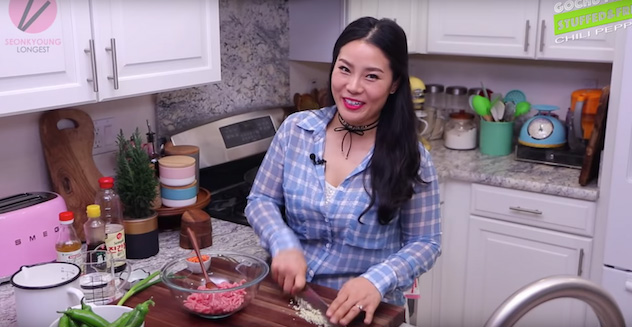 Feel like you’re in a cooking rut and aren’t sure what to take on next? Check out these five underrated female chefs for culinary inspiration: TaiwanCooking Opening all of […]