The teaser for Syfy’s upcoming series “Deadly Class” is finally out!

The show, created by Joe Russo and Anthony Russo, the duo behind the latest “Avengers” film, is based on the graphic novel of the same name. Set in the 1980s, it follows a teenager who enters a training school for assassins.

Lana Condor is Saya, a former Yakuza clan member and student at the school, while Benedict Wong is the headmaster, Master Lin.

“Deadly Class,” which is set to premiere next year, was picked up to series last month. 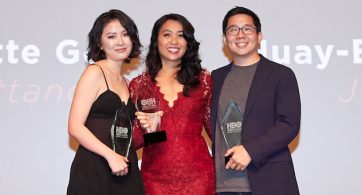 A child’s voice on a cell phone, the space between two doors, sharing a tub of bubbles with a sister — that’s what home means for the winners of […]