Move aside, Channing Tatum. There’s a new flock of dancers looking to take over the silver screen, and they’re all Asian.

Written, directed and produced by NaRhee Ahn, “It’s Asian Men!” is a short film that describes itself as a “Magic Mike” parody strictly featuring Asian men. Noticing a lack diversity in Hollywood and the hyper-desexualizing of the Asian male, Ahn and producer Junko Goda (who acts in the film) took it upon themselves to set things right, and to show just how desirable Asian men are.

The story follows an Asian American couple who decide to watch “Magic Mike” to get into the mood, but the night is quickly ruined when they realize there are no Asian men in the film. When the wife falls asleep, she fantasizes about her husband and several other sexy Asian men seducing her with some dirty dance moves – we’re talking about a lot of pelvic action.

As expected, the film promises to deliver as much on-screen hotness as it can. And this shouldn’t be much of a challenge as the chiseled cast includes model and actor Yoshi Sudarso, musician Bo Haan, actor Cedric Jonathan and dancer Randel Cuevas.

The film is currently in pre-production and looking for help to make this fantasy a reality through an Indiegogo campaign. Currently, it has raised about $4,000 of the needed $5,500.

If all goes well, filming will start as soon as winter. 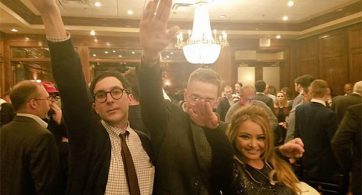 Tila Tequila, the Vietnamese American reality TV star, made a bizarre announcement this week: She’s a self-declared Nazi. Now she’s suspended from Twitter. The 35-year-old who rose to fame years […]