It’s that beautiful time of year when all we want to do is kick back in the sun and read. When it comes to choosing a book to cozy up with, we’ve got you covered — whether you love poetry, memoirs, history or novels, this list has them all.

“The Fortunes” is the newest historical novel by Davies, the the acclaimed author of “The Welsh Girl,” and deals with a subject most of us can relate to: what it means to have a mixed identity. The novel is a lavish exploration of more than a century of Chinese American experience, told in four sections set in different periods.

Ziegler, The Economist’s columnist on Asian affairs, presents a wealth of geohistorical knowledge on Russia-China relationships in “Black Dragon River: A Journey Down the Amur River at the Borderland of Empires.” He ambitiously streamlines centuries into a sleek volume, which spans from Genghis Khan to modern expansionist Russia. It is a must-read for anyone looking to learn about the rich history of this fascinating region.

Explaining the cultural differences between the East and West is a challenge, but one that Gish Jen — an award-winning Chinese American author whose work has been praised by writers like John Updike and Junot Diaz — tackles with daring and insight through psychology and sociology.

Poetry lovers will adore “Hour of the Ox,” this award-winning collection by the young talent. Emotional and exquisite, this powerful rendition of the immigrant story was praised by President Barack Obama’s inaugural poet Richard Blanco, who called it “one of the most compelling books of poetry I’ve read in years.”

6. “The Woman Who Had Two Navels and Tales of the Tropical Gothic” – Nick Joaquin

Penguin has brought essential Filipino literature stateside for the first time ever in the form of a collection of the work of Joaquin, long considered one of the Southeast Asian country’s greatest novelists. The volume celebrates the centennial of his birth and includes his 1961 novel “The Woman Who Had Two Navels.”

Jeung’s memoir about facing discrimination and forced relocation is harrowing at times, funny in others and moving throughout. Jeung’s insightful look into social justice and immigration issues addresses how Christians should respond to turbulent times in a powerful reflection on faith and perseverance.

Written by influential Japanese author Minae Mizumura and available in English translation, “Inheritance From Mother” is a harrowing drama about the experience of Japanese women across three generations as a middle-aged woman cares for her sick mother. Gripping and profound, “Inheritance from Mother” exposes cultural contradictions and has been compared by critics to the works of classic authors such as Virginia Woolf and Albert Camus.

Jimin Han’s powerful debut is a brutal tale about a college freshman who is taken hostage and is forced to confront her past. Her plight is highlighted with scenes of political upheaval in South Korea, resulting in an engrossing read.

We end our list with a unique book that will appeal to adults and children alike. Oscar-winning graphic novelist and writer Shaun Tan returns with his interpretation of the Brothers Grimms’ stories, told through a series of vignettes and illustrated by stunning works of sculpture. Neil Gaiman called the book “timeless and perfect, a mixture of darkness and light that manages to capture Grimms’ stories in a way that nobody, to my knowledge, has done before.”

What are you reading? 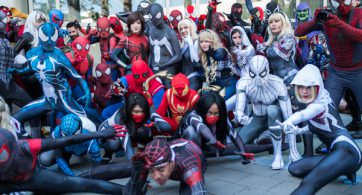 Southern California was filled with comic book heroes, anime and video game characters this past weekend. Don’t worry, there wasn’t a tear in the universe that allowed an alternate reality […]