While droves of aspiring actors flock to Los Angeles every day, Helen Madelyn Kim fled her hometown of Tinseltown as soon as she could. With fantasies of directing her own Asian American stage troupe, she ran off to New York right after graduate school. It turns out, it’s pretty tough to bankroll a theater company. But working for someone else turned out to have some positive results, too.

Over the phone, Kim is every bit as exuberant and animated as her recurring characters on Lifetime’s “American Princess” and Hulu’s “Runaways.” The Angeleno actress also appeared on Netflix’s “GLOW” and Freeform’s “Famous in Love.” While new to the scene, Kim has put in the hard work. After pursuing a double major in theater and art history at the University of California, Riverside, and snagging a master’s in acting at the University of Iowa, Kim waited tables in the Big Apple while performing off-Broadway to chase her big-stage ensemble dreams. They never came. “This was before I realized how hard it is to really have your own theater company,” explains Kim, “back when I was young and full of dreams.”

Ironically, it was losing out on an audition for the play “Vietgone” that connected her with her first big break. But it wasn’t on a glamorous stage of Broadway, it was under the bright lights of Hollywood, for a role as a check-in lady in the women’s wrestling romp “GLOW.” Her first taste of TV fame led to an important realization. “I found myself auditioning a lot for TV, film and commercial work. It got to a point where I was like, OK, I need to give L.A. a shot,” says Kim. “You get to an age where your parents are older, and you’ve been away from your family for a while, so I decided to move back to Los Angeles.”

A perpetual underdog and workhorse, last summer Kim found herself juggling her two biggest jobs up to date, “Runaways” and “American Princess,” as a reward for her hard work. “Runaways” was supposed to be a one-off, but Kim’s stellar performance parlayed her single appearance into a recurring guest role. “American Princess” was another unlikely victory. While checking in, Kim felt her heart sink when she saw the high-voltage names auditioning ahead of her. “I’m not going to book this; this is clearly going to one of these actors,” she recalls thinking. “Whatever, I’m just going to have fun and just do my thing.” She did her thing. She got the role.

Kim’s thrives on bold, over-the-top characters. In “American Princess,” a comedy that debuted in June, which follows a scorned Manhattan bride joining a Renaissance faire, Kim cranks up her snobbery as Lexi, a sassy New York socialite. In “Runaways,” she exists in the same universe as Spider-Man and Captain America as Megan, a bubbly millennial working at a corrupt nonprofit. Like a well-charged phone, these characters are always juiced up to 100 percent, and their brief appearances highlight a blend of Kim’s effervescent personality and extensive thespian pedigree.

Despite her momentum, Kim isn’t looking ahead because she knows she can lose it all in an instant. “For me, I don’t know when I’m going to work again,” she says. “I’m just going to take this in.” Even now, she catches herself reveling in her on-set surroundings in between takes; sometimes, reality still hasn’t sunk in. After all, even talented actresses need to fangirl sometimes.

When Kim feels out of place, she reminds herself how far she’s come. “I worked really hard, I earned this. It wasn’t just handed to me,” she recites. As the first act of Kim’s show-biz career concludes, it seems like the best is yet to come. 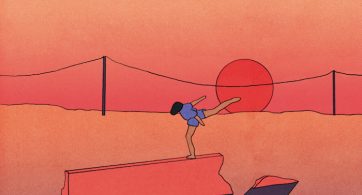 A number of important cultural figures, like Georgia O’Keeffe and even Moses, the emancipator of the Israelites, retreated to the harshest environment on Earth—the desert—to seek divine inspiration. Melina […]