A number of important cultural figures, like Georgia O’Keeffe and even Moses, the emancipator of the Israelites, retreated to the harshest environment on Earth—the desert—to seek divine inspiration. Melina Duterte, better known by her stage name Jay Som, is only the latest to returneth from the desolate expanse with a bounty to share.

During a week-long solo retreat to California’s Joshua Tree, Duterte wrote the majority of her new album, “Anak Ko,” and upon her return home, she recorded, produced and mixed it. Meaning “my child” in Tagalog, “Anak Ko” is Jay Som’s second proper album, which follows her 2017 debut “Everybody Works.” A number of significant things have happened in her life since: Duterte moved to L.A., fell in love, and quit drinking—for good.

The indie crooner has made a name for herself because of her emotional lyrical content and signature blend of dreamy bedroom pop, and “Anak Ko” is no exception. But her latest work is characterized by a clarity indicative of her newfound sobriety, and is reminiscent of the vast expanse of desert where “Anak Ko” was conceived.

The album kicks off with the heavy bassline and chill, picked guitar of “If You Want It.” Duterte pensively sings about a lost, but not-quite-gone love, as whining synths wail the track’s melody. With the tinny strum of an electric guitar, the album then transitions into “Superbike,” the first single of “Anak Ko” that was released on June 4. “Superbike” has a jingle-jangle quality reminiscent of the Cocteau Twins’ arguably most upbeat (and intelligible) album, “Heaven or Las Vegas.” It’s a sweet but simple pop song with layers of pleasant instrumentation that combine the laid-back feel of acoustic guitar with the power of an electric. As Duterte fantasizes about hopping on her “superbike” “going 80 in the night” away from a former lover, it’s hard not to want to hop on that bike with her.

Make sure to stick around to the end of “Anak Ko.” The record’s biggest highlight is also its final track. With the whine of a steel guitar and a bold snare drum, “Get Well” strikes a refreshing contrast to the rest of the album. The tune conjures up a mood that feels like looking into a hazy, orange desert sunset somewhere way out west, as Duterte sings of a friend struggling with substance abuse, and reflects that she’s “been sick like [them],” too.

“Anak Ko” is a work of art with a gentle heart. It’s an album that strives to articulate and recreate an atmosphere of complex human feelings, like harboring lingering feelings for past lovers and the special kind of tenderness one feels for a friend who’s fallen on hard times. The lyrics are simple and bare, but the sonic landscapes Duterte has created leave room for her listeners to explore a tender and emotionally charged environment, and the innermost secrets of their own hearts. 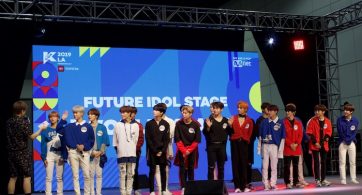 At 2 p.m. on Aug. 17, an eager crowd of fans screamed in excitement as they swarmed to the front lines of an empty red carpet backdrop. “What’s happening […]