The series, executive produced by Terri Minsky, stars Peyton Elizabeth Lee in the titular role as she navigates life as a pre-teen — and deals with the aftermath of learning that her sister Bex (Lilan Bowden), is actually her mother who wanted to hide her teen pregnancy, and that Cece (Lauren Tom), who she thought was her mother, is her grandmother.

Since its debut last year, “Andi Mack” has emerged as one of TV’s top-rated shows among tweens, and has gained a reputation for its inclusivity, which includes the network’s first-ever portrayal of a gay middle school boy, played by Joshua Rush.

Lee, 14, started acting in 2015 and appeared in Showtime’s “Shameless” before taking on her role as Andi. Bowden, who has a background in comedy, previously played Darcy Bishop in Fullscreen’s “Filthy Preppy Teens.” Tom is best known for her turn as Lena St. Clair in “The Joy Luck Club,” as well as for voicing Amy Wong in “Futurama.”

KORE sat down with Lee, Bowden and Tom ahead of the third season premiere to talk about how they’ve influenced one another, and about lessons learned.

Each of you are embarking on important relationship arcs outside the grandma-mom-daughter dynamic this season. Bex gets her proposal, Andi’s dealing with Jonah, Ham came back to Cece.

Tom: I don’t think Cece and Ham even realized how much they needed each other until he went away. It’s a beautiful addition to the whole picture of the family.

Bowden: The thing that I think Bex was most afraid of when we first meet her in the pilot is commitment, structure and responsibility. Those are things that do not fit with her, so it’s a pivotal moment for her to say, “I want this.” She’s leveling up and changing.

Lee: With the three of us, you see how, even when they get into a fight, love is at the foundation of their relationship, and you see how no matter what happens they always come back to one another and always have one another to lean on. The first two seasons were setting up big, broad concepts and developing this world. In Season 3, you’re going to get to see little nuances that make the relationships as unique as they are.

What’s so unique about Andi Mack is that you three represent three generations of female Asian actors. Do you talk about each of your experiences amongst yourselves?

Lee: We all entered this industry at different times, so it’s cool to see how the business as a whole has evolved. We see a lot of the same patterns and the same tendencies but in different ways and in different forms. Talking to Lilan and Lauren, it’s seeing that Venn diagram of different and similar experiences.

Tom: In just talking it out, I realized I can shed a little bit of wisdom in how to approach things and not be so reticent. I’m cheering these guys on because they came in with a much stronger voice than I had when I was their age, especially [Lee]. It really is the squeaky wheel that gets the grease sometimes! These two understand on a much deeper level than I did, that there’s no shame or embarrassment in trying to move ahead.

Bowden: In sharing our stories, it’s made me so appreciative. Talking with Lauren, I’ve seen how we have a long ways to go, but that we’ve come a long ways, too. It makes me appreciative of people like her who helped pave that way and who had to deal with a lot more things that I didn’t have to.

Lee [to Bowden]: I feel the same way about you! We all sort of have this revolving door of gratitude.

Lauren, what’s one thing you wish you had back in the days you did “The Joy Luck club” that exists now?

Tom: The ability to be able to reach so many people with your message through social media, and having been able to galvanize the Asian community to come out and see “The Joy Luck Club.” That would have made a huge difference.

Bowden: Yes. We just recently learned to rally, too!

Tom: We’ve got to keep going. We can’t just rest on laurels like popularity and trends; we have to produce the goods, too. That’s why I always tell people to study as much as they can so they can ground themselves in a craft. If you want to have a really long career, you have to have something to give.

Lilan and Peyton, I’m curious as to the most memorable piece of advice Lauren has given each of you.

Bowden: Lauren’s wisdom helped me to just trust my instincts. The message I kept getting again and again was that, in order to be successful, shut your mouth, do your job and don’t ask for more than what people are giving you right now, because they might just fire you. Then there’s the other part of my brain that says, “No, I want to advocate for myself and that’s how you get ahead.” Lauren told me that she noticed I can speak my mind and she likes that — and that’s helped me feel empowered to do it.

Lee: The most I learned from Lauren is just sitting back and watching her on set. She moves so fluidly and she is so genuine and poised. Just being able to observe someone who’s so comfortable and so respectful — but she makes sure she gets her point across. It’s really special. She’s a force to be reckoned with.

Lauren, what’s a lesson you’d say you learned working with Lilan and Peyton?

Tom: Sometimes you teach what you most need to learn, right? That having a voice is what it’s all about. It’s been such a struggle for me my whole life, and to see these guys do it with so much grace and power — it’s inspiring.

Bowden: Lauren, you’re not lacking in jet fuel by any means.

Tom: I’m so grateful and happy to be able to have done what I love all these years. That’s what I hope my kids [and young people] will find, because then it really doesn’t feel like work, does it? 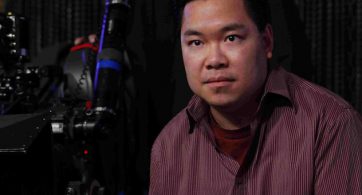 When former First Lady Laura Bush compared the detention of migrant families at the U.S. border to the forced relocation of Japanese Americans more than 75 years ago, Americans […]