Lela Lee, the creator of the cartoon brand Angry Little Girls, is locked in a heated trademark dispute with blogger Phil Yu, the founder of Angry Asian Man, claiming that his website infringed her trademark. The dispute has recently been made public on both parties’ respective blogs.

On Feb. 13, Lee posted a blog entry entitled, “Why the ‘Angry Asian Man’ is pissing me off,” claiming that the name “Angry Asian Man” was too similar to her brand and has been causing consumer confusion for years. She also claimed that Yu plagiarized her brand’s concept, website features and shirt design. To counter Lee’s allegations, Yu published his own blog post, “I Am Being Threatened with an Angry Asian Lawsuit,” on Feb. 17.

Both parties state that the dispute began in May 2014 when the U.S. Patent and Trademark Office (USPTO) rejected Yu’s trademark application for “Angry Asian Man” on grounds that the name was too similar to Lee’s “Angry Little Asian Girl,” which was registered in 1999 as a goods and services trademark. According to Yu, he initially thought the rejection was “amusing” since he has had a collegial relationship with Lee since 2005 and considered their works to be completely different.

For some background, Lee first created Angry Little Asian Girl in 1994, releasing a series of animated short films that centered on Kim, a cute but snarky Asian girl with acidic humor. The artist began self-publishing comic strips on the website angrylittleasiangirl.com in 1998 and expanded the brand into Angry Little Girls to include new female characters of different backgrounds. Her comics then grew into a line of merchandise, including graphic T-shirts, books, mugs and dolls.

Angry Asian Man launched in 2001 and began as a personal blog where Yu expressed his thoughts about Asian American news, culture and politics. A year later, the blog started to gain traffic and was moved to a separate domain. After Yu was laid off from his position as a content producer for Yahoo! Movies in 2013, he dedicated himself full-time to the site. He has often credited Angry Little Asian Girl as one of the many inspirations for his blog.

“Despite the two words we share in our names, there are clear differences in what we do. I honestly thought Lela had felt the same way,” Yu wrote in his Feb. 17 blog post.

Lee, however, was not amused. When she read Yu’s May 13, 2014 email about his rejected trademark application, she admitted that she has always felt bothered by the similarity of their aliases and urged Yu to adopt a new name. Taken aback by her response, Yu promised to further discuss the issue with her later in May. About a week later, Lee followed up with another email comprised of unsolicited but helpful trademark and image consulting, according to Yu’s blog post. The comic artist strongly recommended that Yu adopt the name “Angry Asian America,” the title of a YouTube talk show he co-hosts with Jenny Yang on ISAtv.

There was a two to three month period of silence before the dispute resurfaced in the summer, due to a pitch meeting between Yu and Mnet about a possible TV show. On Sept. 16, Yu received a cease and desist letter from Knobbe Martens, the law firm representing Lee. The letter requested him to transition his name into one that does not use any variation of “Angry Asian” and to relinquish control of his website’s domain name, Facebook page and Twitter account to Angry Little Girls, Inc. After this incident, Yu contacted his lawyer, and the dispute continued to escalate.

Last November, Lee also sent a cease and desist letter to Angry Girl Comics’ creator Wendy Xu, who published her own side of the story on her Tumblr.

In an email sent to Yu on Oct. 12, Lee hurled personal insults at him and his family as well as accused him of stealing her website’s concept and unfairly benefiting from her work. At one point, she wrote: “You have no right to be known as the ‘Angry Asian.'”

“He was inspired by me and now he’s begun taking credit for my work,” said Lee in a public response to a commenter on her website. “Trademark law is about making sure the source is not confused. I have to make a stand for my copyrights and trademarks. I’ve tried co-existing, but there is too much confusion … Should I let a ‘Brother’ infringe my work because we’re ‘community’?

Yu argues that Lee “has failed to enforce her trademark” since she delayed in filing action against him. He points out that he has been writing under the Angry Asian Man name for 14 years and only received a cease and desist letter last year, even though Lee claims that she first became aware of the blog’s existence in 2005. He also adds that Lee’s actions over the years have implied that she has acquiesced the use of his moniker by contributing to his blog and inviting him as a guest to panels she had organized, such as one at 2013 Comic Con called, “Angry Asian Media Makers: Creating Content, Finding Fans.”

Lee cites “progressive encroachment” as the reason behind her 10-year delay, claiming that Yu’s activities did not become “imminently threatening or confusing” until he was laid off from his Yahoo! job and began expanding his brand into a web series.

As of Feb. 18, Lee’s lawyers sent Yu a document that outlines the allowed use of “Angry Asian America” under certain parameters. Yu is currently conferring with his attorney and reviewing the terms.

Although the dispute is far from being resolved, it seems like both parties are doing their best to work out a solution without going to court. Lee has even publicly apologized for insulting Yu and his wife in one of her publicized emails to the blogger and removed her original post that told her side of the dispute.

In her latest blog entry, Lee wrote, “[I] want to say, that there is room for Phil and I to exist, without stepping on each other’s toes. I really want to be happy for Phil and have him be a success, and now was the time to bring it up when he was stepping up his activities.”

“I firmly believe that our respective brand entities could have co-existed and thrived — as they have for the last fourteen years — without being territorial. Our community is small, and a conflict like this isn’t constructive,” Yu said in his Feb. 17 blog entry. “No matter how this shakes down, nobody really wins.”

“Isn’t the Internet Big Enough for More Than One ‘Angry Asian’?” by Reappropriate

“Angry vs. Angry and Why All of Us Lose” by Jeff Yang

“A Comment to Lela Lee of Angry Little Asian Girl, by Min Jung Kim” by 8asians

“A Candid Interview with Phil Yu, aka Angry Asian Man”  by KoreAm Journal 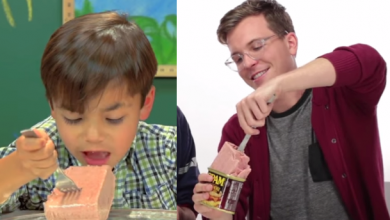 I don’t know about you, but coming from a Filipino household, I grew up with cans of Spam lining the food cupboard. It’s certainly not the healthiest of dishes, […]