The first trailer for A24’s “Everything Everywhere All At Once” has dropped.

Directing team Daniels (Dan Kwan and Daniel Scheinert) are forging a new venture into the sci-fi genre, and yes, it seems every bit as bewildering as their previous feature film, “Swiss Army Man.” The trailer first shows Evelyn Wang (Michelle Yeoh) as she apparently works through her taxes with an auditor, played by Jamie Lee Curtis. But things take a turn for the uncanny when Wang is pulled back in her rolling chair by a pair of arms that seem to belong to her husband (Ke Huy Quan) from a parallel reality. The screen then splits into double vision, revealing that more than one Evelyn Wang exists (hello, multiverse!). From there, the trailer spirals into cross-universe adventure chaos, with Wang taking on traits from all her other selves to defeat an evil force we can’t quite identify.

“Everything Everything All At Once” will premiere at the South by Southwest festival on March 11, 2022 and appear in theaters on March 25, 2022. Until then, you can puzzle through the trailer here. 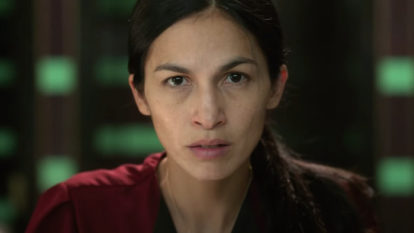