IDENTITY LA, held on Saturday, May 11, is an annual celebration of Asian Pacific American Heritage Month. This year’s festivities brought together internationally renowned artists—TOKiMONSTA, MILCK and Sophia Black—and activists to celebrate API women. Last year’s event was held at City Hall and drew a crowd of over 10,000 attendees who spilled into the streets of downtown L.A. This year’s event, situated in the hills of Hollywood at the John Anson Ford Theatre, drew a smaller, but no less enthusiastic crowd. Inspirational speaker and former Wong Fu Productions production director Christine Chen and digital influencer and Michelle Khare hosted the event. Steven Lim, the creator and host of the popular online Buzzfeed series “Worth It,” Jason Y. Lee, the founder and CEO of Jubilee Media, Tracy Zhao, Executive Director of API Equality-LA and Dan Matthews, better known as rapper DANakaDAN, were also in attendance.

DJ Rosé aka Jenny Rodil warmed up the crowd with an upbeat rap and R&B mix. Next, trilingual R&B pop singer Sophia Black stepped onto the stage decked out in an all-white, sparkling ensemble. One of the hits of the night was “Ikuyo,” Black’s multilingual collaboration with rapper KYLE, who joined Black onstage for the song. Black closed out her set with one of her hits, “Anchor.”

Between Black and MILCK’s sets, Kev Nish of the Far East Movement, filmmaker Philip Wang of Wong Fu Productions, Prohgress of the Far East Movement, city council member David Ryu, and Speaker of the California State Assembly Anthony Rendon came onstage to honor Awkwafina as the event’s Arts & Entertainment Pioneer. “Events like this are really important, especially ones that celebrate Asian American women at a time like this,” said Awkwafina. “I look forward to the future generations that will be standing here, performing here, being honored here because it’s all about that.”

Her speech was followed by Chinese American singer/songwriter Connie Lim aka MILCK, who took to the stage with an acoustic version of “Quiet,” which served as the anthem for the 2017 Women’s March and the #MeToo Movement. Katherine Ho followed with a performance of Coldplay’s “Yellow” in Mandarin Chinese, popularized in the soundtrack of “Crazy Rich Asians.” Before her performance, event host Chen read a statement from Ho: “I’ve never been proud to be Asian, and I wish I could tell my younger self how wrong I was to have all those insecurities and just to embrace who I am.”

The final honorees of the night were entrepreneur and activist Nadya Okamoto and the nonprofit Center for the Pacific Asian Family. “I’m standing here today as a proud Asian American,” Okamoto said in her acceptance speech. “I’m really embracing this community, and I’m dedicating this award to all the incredible Asian American leaders who’ve come before us paving the way, but also to all the young Asian Americans sisters who are going to come after us.”

The night climaxed with a performance by Grammy-nominated, EDM artist Jennifer Lee aka TOKiMONSTA. Malaysian singer-songwriter Yuna also joined LeeA for “Forevermore” and “Don’t Call Me.” Before starting her set, she invited the audience to come to the front of the stage. “What I want you guys to do,” Lee said. “Is to come all the way to the front. Let’s have a good time.”

And a good time it was. More than anything else, the night was a celebration of API achievement in entertainment and social justice work and an invitation to young API innovators to embrace their heritage, be bold and change the world. 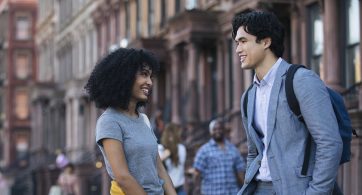