In 1992, Kristi Yamaguchi inspired generations of Asian Americans when she won gold at the Olympics in ice skating in women’s singles. Then there was Michelle Kwan, who has clinched numerous U.S. titles and two Olympic medals. Now, there are rising stars Nathan and Karen Chen, who both find themselves posed for bigger wins, and leading more than a dozen Asian Americans who are becoming increasingly visible in the sport’s top levels.

According to Team USA, 39 percent — that’s 15 of 38 skaters — of the top U.S. competitors in elite programs this season in men’s and women’s singles were of Asian descent.

Last January, Nathan Chen, 18, and Karen Chen, 16, who are not related but who are both Chinese American, won the men’s and women’s gold medals at the U.S. Figure Skating Championship in Kansas City.

“I did not know that. I think that’s really cool,” Nathan Chen told Team USA, upon being told it was the first time that skaters of Asian descent won both singles championships. “We, [Karen and I], come from a similar background and both our parents went through a lot to give us the opportunity to skate and help us be successful. I think what Karen and I represent is everything that our parents stand for and how they raised us.”

During the championship, Nathan Chen, a Utah native, stunned the figure skating world by landing five quadruple jumps, which had never been done before, and became the youngest U.S. men’s champion since 1966. Karen Chen, a California native, broke records by skating 72.82 in the short and a 141.40 in the free skate.

“We want to inspire as many people as possible,” Karen Chen told Team USA. “In this case, our audience is young Asian American kids.”

Both say they looked up to Yamaguchi and Kwan when they were younger and are now setting their sights on San Jose, California, in December, where they will compete for the U.S. championship title. The event serves as the final Olympic-qualifying event ahead of the Winter Games in PyeongChang in South Korea next year.

“It’s been fun to see the growth of Asian Americans in skating,” Yamaguchi told Team USA. “These athletes get to go and compete internationally. Being a role model for Asian American athletes is something looking back now that I hopefully was able to do.” 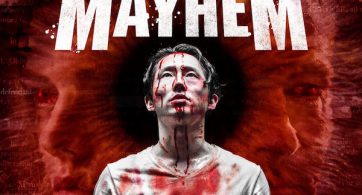 AMC Network’s Shudder and RLJ Entertainment have partnered up to release “Mayhem,” the genre-bending, action-thriller film starring Steven Yeun, slated to hit theaters in early 2018. For those who […]