Playwright Carla Ching’s “The Two Kids That Blow S–t Up” is set to premiere at the Lounge Theatre in Los Angeles on Aug. 18.

A play “about not trying to fall in love with your best friend so you end up hating them,” the show follows the lives of Asian Americans Diana (Julia Cho, “Sounds We Have No Letters For”) and Max (Nelson Lee, “Fast Company”), who meet at a young age when their parents begin a relationship. The two try to manage their romantic feelings toward each other amid the ups and downs of their family life.

Artists at Play, an Asian American collective of creative professionals, is presenting the play. Its  goal is to tell stories of communities underrepresented in theater, primarily Asian Americans. After a successful Indiegogo campaign, the group was able to begin producing “The Two Kids That Blow S–t Up”– their sixth mainstage production, and their first world premiere.

“This is a really big step for Artists at Play because it shows that we are supporting new and diverse voices in American theater,” said Marie-Reine Velez, a founding member of Artists at Play. Jeremy Lelliott, founding artistic director of the pay-what-you-want Coeurage Theatre Company, will direct the program.

Carla Ching, a Chinese American, who began her writing journey with Peeling at the Asian Americans Writers Workshop, a pan-Asian performance collective, where she wrote and performed with for three years, is behind the work. Her plays include “Fast Company,” “The Sugar House at the Edge of the Wilderness” and “Dirty Big Blind/Little Blind.” She also wrote for USA Network’s “Graceland” and AMC’s “Fear the Walking Dead.”

“Carla is such an exciting writer because she creates Asian American characters that we don’t see in American theater,” Velez said.

Ching is a member of the New Dramatists, an organization of playwrights, and Kilroys, a group of female playwrights and producers. She was the former art director of Asian American Theatre Company, a non-profit theatre company which has a goal of “connecting people to Asian American culture through theater.”

The play shows through Sept. 11. 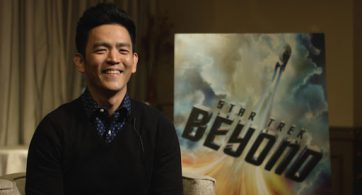 Nearly 15 years after shooting the Asian American cult classic “Better Luck Tomorrow,” John Cho found himself on the set of the third installment in the “Star Trek” franchise […]