When we think comfort food, most of us revert back to the dishes our moms made us. Here, we salivate over home cooking-from-another-mother.

In the Asian food scene, Filipino food is like that last person picked for the dodge ball team: under-recognized and little appreciated. Despite Filipinos being the second largest Asian ethnicity group in the United States today, the culinary landscape has yet to reflect its ever-growing population. Even in the Bay Area, an area home to some of the highest concentrations of Filipinos outside of the Philippines, there are only pockets of Filipino food wastelands.

This is where chef Charleen Caabay of Oakland’s Kainbigan comes in. She started out cooking pinoy food for friends, and after seeing the lack of Filipino culinary offerings in the region, she opened her own restaurant. “As diverse as Oakland is,” says Caabay, “they don’t have enough Filipino food.”

With a name that means “Let’s eat, my friends” (in Tagalog, pagkain means food, kaibigan means friend) and a straightforward, stick-to-your-ribs menu, Kainbigan is not one of those places with too-fancy offerings and sky-high prices. Rather, the restaurant specializes in home-cooked, straight-from-the-heart Filipino food, which is characterized by its salty, sour and sweet flavors and Chinese and Spanish influence, remnants of the country’s trade and colonial histories. Take the adobo, arguably the national dish of the Philippines. Meat is marinated and cooked in a blend of soy sauce and vinegar alongside black pepper, bay leaves, and garlic. While the chicken adobo (the most common and recognizable version) is absolutely delicious, Caabay is most proud of her Pork Adobo. It may seem like a simple marinade, but “..the way it’s cooked and how long you braise it for – when it’s cooked for just long enough, the taste is amazing,” says Caabay. Served in a wooden bowl atop a heaping cloud of white rice, meant to soak up the expertly balanced sauce, the adobo is comfort food 101, filling you up in the most delicious way possible through a flavor profile that is as complex as it is appetizing.

Another standout item at Kainbigan is Caabay’s own unique creation, Crispy Chicken Adobo over Garlic Noodles, an interesting take on pancit, another Filipino food staple. Instead of the typical rice noodle, Caabay opts for an egg noodle, the chef’s personal favorite, which is combined with the flavorful house garlic sauce and topped with bits of crispy adobo. “I think that’s one of my best dishes because I created it here, and it has a little bit of everything,” she says with a smile. It may not be your typically dry pancit, but the flavor profile of the Garlic Noodles is purely pinoy.

Caabay’s passion for traditional Filipino culture is something she wants to share through the meals she serves. “If you were at home, this would be how mom or lola [grandma] would make it,” she says. And her challenge to potential diners? “Come with an open mind and a big appetite, and I can guarantee that you’ll leave here feeling good.”

When it comes to comfort food, chef Kimmy Tang knows a thing or two – as owner and chef of 9021Pho in Beverly Hills, Calif., her whole career revolves around her favorite comfort food, the Vietnamese noodle soup known as pho. “Pho is like your breakfast,” she says, “very nutritious and energetic. It sets your energy for the rest of the day.” In addition to traditional beef pho and chicken pho, Tang offers a spicy pho that is reminiscent of the southern style pho she loved in her native country, Saigon. “Northern Vietnamese cuisine is often less spicy and is not bold in any particular taste,” she explains. “Southern Vietnamese cuisine is often vibrant, flavorful, and sweeter than other regions.” Either way, what makes pho is the broth, and for Tang, “the broth is a labor of love. It’s cooked slow for a long period of time, about eight hours.” She also carefully selects lean, high quality meats and offers reduced fat and low-carb versions to cater to the local clientele.

Surrounded by pho day in and day out, does Tang ever get tired of pho? Apparently not. “I get my [serving of] daily vitamins from small portions of pho throughout the day,” says Tang. “The concentrated broth is full of vitamins and nutrients.  It gives me a nice dose of energy, the healthy way.”

When people want comfort food, some may reach for a calming chicken soup or greasy fried chicken. I turn to Cambodian food. I crave things that pack a lot of flavor, and Cambodian cuisine incorporates a lot of spices (often made into a spice blend known as kroeung). And with cold weather around the corner, I know I’ll want a particular kind of Cambodian comfort food: the hearty soups.

During the winter in any Cambodian American household, hearty soups are always on rotation for any meal of the day, with plenty to go around for everyone (including our neighbors, who also make more than enough food). Noodle soups (like kuyteav) and rice porridge (babor) make for popular breakfast dishes, while sour soup dishes
like somlaw machu kroeung, which incorporates ingredients like kroeung paste, turmeric, morning glory, coriander, stewed beef ribs, and tripe, make for a great main dinner course. Another popular dish is somlaw machu youen, which incorporates fish, shrimp, pineapple, tomatoes, and the celery-like bac haÌ€ in a tamarind-flavored broth.

For me, the one soup that represents the epitome of Cambodian comfort food is the national dish somlaw koko (Cambodian ratatouille). It’s perfect for anyone who likes to savor the discovery of various ingredients in a complex dish. With your first sip, you’ll be overwhelmed by the layers of contrasting flavors and textures of lemongrass-based kroeung paste, prahok (fermented fish paste), palm sugar, ground toasted rice, assorted veggies (including kabocha and Thai eggplants), and meat (most Cambodians prefer pork spare ribs cut into bite-sized pieces). I also eat the soup with a side dish of fish sauce (chopped with Thai chilies) and serve it over rice – the perfect way to enjoy the ultimate Cambodian comfort food.

Dying to try somlaw koko? Check out elephantwalk.com for recipes, or Sophy’s in Long Beach, Calif.

Mention soup dumplings as gourmet fare, and one immediately thinks of Din Tai Fung. The Michelin-star, Taiwanese restaurant that sparked a million lines around the world (there are more than 80 locations globally).  Go for their Juicy Pork Dumplings, which burst with flavorful soup in your mouth. Just make sure to do it the proper way: make your dipping sauce 80-20 vinegar to soy sauce, cool the dumpling in the sauce, and then eat whole (do not bite and do not slurp soup out!). unless, of course, you’re having their coveted Truffle Dumplings, normally reserved for dignitaries and exclusive to The Americana branch – that you eat straight out of the bamboo steamer. 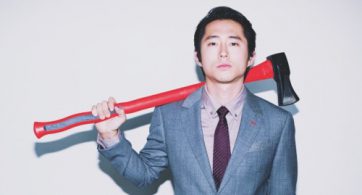 (SPOILER) After the anticipating Episode 5 of The Walking Dead‘s Season 6, we have been so anxious to learn whether Glenn did actually get torn up by that zombie.  Many […]