As Auli’i Cravalho puts it, Lilette Suarez — the teenage theater nerd she plays in the NBC musical series “Rise” — is living the high school dream.

“I’ve had the pinnacle, the quintessential, high school experience through Lilette Suarez,” Cravalho said, at NBC’s summer press day last week. “Did Auli’i get cast as lead roles in theater? No! Did Auli’i get invited to house parties or have a quarterback boyfriend? No!”

Lilette is a student at Stanton High, where she is a member of the drama club led by a young English teacher named Lou Mazzuchelli (played by Josh Radnor). Lou puts together a production of the musical “Spring Awakening and casts Lilette in the role of the female lead Wendla, as well as a diverse cast which includes Robbie (Damon J. Gillespie), the quarterback of the football team; Simon (Ted Sutherland), who struggles to reconcile his sexuality with his upbringing in a very conservative, very religious home; and Michael (Ellie Desautels), a transgender student who is transitioning from female to male.

Cravalho is 17 years old, and still in the midst of completing her real-life high school studies. The show marked her first on-screen debut. Before “Rise,” she was, famously, plucked straight out of Mililani, Hawaii, to voice Disney’s crowd-pleasing “Moana.”

Now nearing the end of its 10-episode first season, “Rise” — inspired by Michael Sokolove’s book “Drama High — faced controversy before its spring premiere, with headlines suggesting it “straight-washed” its leading character Lou, who in the book comes out as gay. Lou Volpe, the drama teacher on whom the book is based, later defended the the show, and said it not meant to be a direct adaptation of his story.

“It’s very important to us that our cast that play the characters are as broad and as inclusive as possible,” Cravalho said. “We wanted to show what it was like in real high school. … Any type of conversation that was previously controversial or touchy, those air quotes can be taken away because we’re talking about them freely and letting them air out,” Cravalho said.

With just two more episodes left in the season, Lou and the students are facing challenges in both their personal and school lives. Lilette, for one, is navigating a rocky road with her mother. But the show must go on.

“In the last hell week where things are supposed to be coming together seamlessly, everyone and everything is slowly but surely breaking apart,” Cravalho said. “It’s at those times that we find our passions to be the driving force that, ‘Everything might be going wrong, but I want this to go right.’ So they put their heart, energy and soul into it.” 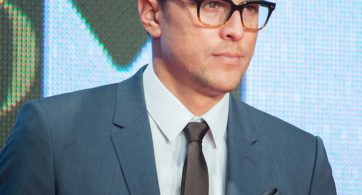 Cary Fukunaga’s next film project is “The American,” a biopic about the composer Leonard Bernstein starring Jake Gyllenhaal, according to Deadline. The film will be based on a biography […]