In one of the most iconic movie scenes from the late ’90s, Fa Mulan hides away under the cover of night and plans to take her father’s place in war. But before leaving, she slices off her waist-length black hair—a long-standing marker of femininity and beauty in many Asian cultures.

Even though “Mulan” hit the silver screen almost twenty years ago, its depiction of hair and its connection to beauty, set to a dynamic soundtrack and stunning visuals, still remains a nostalgic facet of pop culture for many API today.

Mulan was one of the few strong female API figures in mainstream cinema of her time, but she was also East Asian, upper class, and of course, animated. As Hollywood branches out and recognizes API from all backgrounds, it’s time to break down the notion that there’s only one way to be Asian. Deconstructing the myth of perfect Asian hair is one place to start. From thick and curly to straight and thin, and colors of all shades, Asian hair can come in a wide variety of textures and types. The thin, smooth, jet-black hair commonly associated with Asians is not the norm. It’s 2019, so why does the myth persist?

Growing up in the Bay Area as a Chinese American, Yang always thought about hair in relation to her ethnic identity. “When I was born, I had pretty typical straight black hair, but it changed in first or second grade,” Yang said. “It began to grow super curly, poofy and wispy.”

Although her mom reassured her that her hair was special and often said that she shouldn’t ‘hate it or hide it,”’Daphne knew that her hair was not the easiest to deal with, especially in a family where no one else shared her hair type.When Yang was younger, people would make jokes and ask her if she was “really Chinese” because her hair was so different from the rest of her family’s. Now after years of coloring and straightening, she’s learned to see her waves and curls for what they are: something that sets her apart from the crowd.

Pros: Now, Yang’s hair helps her feel truly herself. With her natural hair, she knows she isn’t trying to conform to a standard placed upon API women, a standard that she isn’t necessarily comfortable with and doesn’t  want to be a part of.

Cons: Yang’s curly hair is prone to frizziness, but oils can help tame the frizz. Although regularly oiling hair can keep it shiny and strong, oiling takes a lot of time that many young adults don’t have.

Gao has tried every hair dye under the sun, but her natural hair is thick, straight and black. She grew up watching cartoons and in particular remembers Sakura from “Naruto” sporting pastel pink hair, which influenced her hair choices later in life. Pink, purple and burgundy are just a few of the hues Gao has experimented with.

“I don’t look at my hair and go ‘It’s an Asian thing,’ but little things like being able to get ready so quickly is something some of my friends don’t have the advantage of,” Gao said.

Pros: Gao’s hair is low maintenance. With no need to style or even brush it in the morning, Gao can just get up and go.

Cons: Gao’s thick hair has been known to break more than a few hair ties, so she’s always sure to have a few extra on hand. She also shares a common sentiment with people who have straight hair—it can feel boring. Sometimes Gao wishes she had curly hair, even for just a day.

Chang identifies as mixed race—half East Asian and half white.

“People often tell me how lucky I am to have my type of hair,” Chang said. “It’s very thick and stick straight. I feel lucky because my hair is easily manageable; I don’t have to blow dry it, straighten it, or do anything fancy with it to have it look the way I want.”

Cons: Although Chang loves her hair, she  sometimes wishes that it had more volume, and there are days when she feels her hair is boring.

When Rajani was young, her straight, silky hair would always attract compliments. “Even though I didn’t see my hair as part of my identity, I knew other people did,” Rajani said.

Growing up, Rajani noticed that a lot of her peers, especially those who had more hair or who were more insecure, would physically surround themselves with their hair, using it almost like a mask to hide behind. “I think hair is interesting because it’s our identity and it’s a symbol of beauty, but it can also be a way for us to hide from the world,” Rajani said.

Now, as a recent college graduate, Rajani has curlier hair than she did as a child. She likes that her hair has given her the best of both worlds.

Pros: In India, hair is considered a symbol of beauty—the thicker, stronger, and healthier the hair, the better. Although Rajani doesn’t think that this should be a standard to which everyone is held, she acknowledges that her hair fits this criteria. As an Indian classical dancer, Rajani’s hair is ideal for the hairstyles typical for dancing because it braids easily and holds styles well.

Cons: Especially for Rajani, who has hip-length hair, tangles can take a long time to brush out and manage throughout the day. Rajani’s thick and wavy hair is also prone to frizziness.

For Sarah Cook, a mixed black and Filipina musician based in San Diego, hair is an extension of her art—free and flowing.

Cook’s hair is a hybrid of her parents’: bouncy, with a little wave, but neither too thick nor too thin. Her mom didn’t know how to manage hair that wasn’t like hers (smooth and straight), so she went straight for black hair products, which didn’t quite work for Cook’s hair.

It took a lot of self-reflection for Cook to know that she wasn’t her mom and she wasn’t her dad, she was just uniquely herself. Part of that process happened through her hair. “My hair journey took a long time, but it taught me a lot about myself, and it taught me to love who I am,” Cook said. “ Everyone’s hair journey is different and it’s everyone’s own self love journey as well.”

Pros: Cook’s hair doesn’t require a lot of treatments, and it is generally easy to manage with just a few products and a conditioning mask every once in a while.

Cons: Weather conditions are always on Cook’s mind. When it’s hot outside, her hair can get frizzy. Cook also has to search for the specific products she uses. Although she has tried a drugstore regimen in the past, she has noticed a definite difference in the potency, quality and ingredients of drugstore products compared to professional salon products.

As a multiracial Vietnamese, Irish and Norwegian woman, Connell has a positive relationship with her hair and it gives her confidence, but it wasn’t always this way.

As a child, Connell couldn’t go to her mother, who had straight black hair, for advice, and the Asian hairstylists her mother took her to did not know how to work with Connell’s hair either. “My mom used to joke with her friends and family, ‘Have you ever seen an Asian with curly hair?’” Connell said.

At one point Connell used to straighten her hair, but stopped after her mother told her that “a lot of people would pay to get curls like yours.” “My hair isn’t as curly anymore,” says Connell, “It’s just wavy and sometimes I miss the way it used to be, which makes me sad because I wish I appreciated my hair more when it was curly. Even though I miss the way it used to look, I still love how it is now.”

Pros: Connell appreciates her hair texture and color. It sets her apart from others and makes her unique in her family.

Cons: Connell’s curly, fine hair is difficult to braid, and she never knows how frizzy or wavy it will be after showering.

Some people would call Zhao’s straight, thin and black hair the ideal “Asian hair,” but to Zhao, hair is hair. She never disliked her hair, but she also never thought of her hair as special. “That’s why I started growing it out, but I’ve never gone to a salon or gotten anything done to it.”

Pros: Zhao rarely has bad hair days because her hair is straight and never gets frizzy or tangled no matter the climate.

Cons: Zhao doesn’t think her hair type has any cons since it is so easy to take care of—just wash, brush and go.

Born and raised in Indonesia, Sukarto is currently a college student in California. Her hair was curlier and harder to manage in Indonesia’s humid climate, but since coming to Southern California, her hair has become straighter and easier to tame.

For Sukarto, hair has always been an important part of her identity. “I have a strange relationship with my hair in that it’s one of the few things I like about myself, because it was apparently so unique to have it,” Sukarto said.

Pros: Because Sukarto’s hair is thick, it’s easy to style and she doesn’t have to worry about her scalp showing, which can be a concern among people with thin hair.

Cons: The thickness, length and dark color of Sukarto’s hair makes it difficult to dye (a salon once quoted her $500 for a full bleaching). It can also get oily easily in hot weather. 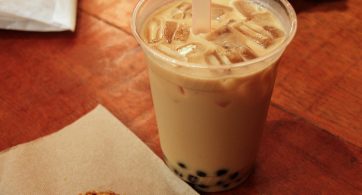 Happy National Boba Day! In celebration of this momentous holiday, we examine why our favorite shop is better than your favorite boba shop. And before you tell us why […]