BLACKPINK member Jisoo is known for dazzling fans on stages around the world, but the K-pop idol is taking on a new challenge as an actress. Fans can finally watch her first starring role in the period K-drama “Snowdrop,” which airs internationally on Disney+ today.

The 16-episode black comedy focuses on a turbulent romance between graduate student Im Soo-Ho ( “D.P.” actor Jung Hae-in) and undergraduate student Eun Young-Ro (Jisoo) as the two become entangled in the real historical events of the June Democracy Movement that took place in Seoul, South Korea during 1987. Their romance will be anything but easy, as the couple’s secrets, as well as the political conflict surrounding them, will battle against their feelings for one another.

The two lovers are joined by a large cast of characters, like hotshot surgeon Kang Chung-ya (Yoo In-na) and struggling student Kye Boon-ok (“Extraordinary You” actress Kim Hye-yoon), as well as an agent for the Agency for National Security Planning, played by Park Sung-woong. Director Jo Hyun-tak and screenwriter Yoo Hyun-mi are reuniting behind this project after their last collaboration three years ago on the hit satirical JTBC drama “SKY Castle.”

Tune in to watch these star-crossed lovers try to beat the odds in “Snowdrop,” releasing bi-weekly every Saturday and Sunday on Disney+. 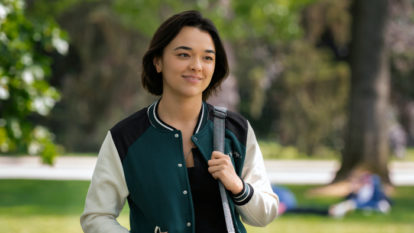 Francis discusses what drew her to the role of Alicia and one of her favorite filming moments from season one.