Time stands still on a Friday evening on the Italian island of Elba. Two cups of hot matcha have been whisked until frothy. A tired musician stares at her reflection in the mirror. She lounges, lathers her hair in oils and scribbles in a journal as the letters become smaller and smaller, until they are no longer legible. For artists who work hard and play harder, rest and rejuvenation is crucial. Japanese singer and musician Kazu Makino knows the hustle, but she also takes time to slow down when necessary, especially after a rough night. “There was a big festa and everybody got really sh-tfaced, including myself, so I changed my routine today,” Makino says. “I didn’t go to the sea or to the village, and now I’ve just been working on music.”

Makino is one-third of the band Blonde Redhead, a byproduct of the 90s conceived in New York City, whose eclectic music dabbles in a bit of everything from trip hop to dream pop. Now, the artist is venturing into new territory with her debut solo album, “Adult Baby,” a melodic vision of her own creation that combines poetic lyrics with Tyrrhenian sea motifs. Although it’s been 26 years since Makino formed Blonde Redhead with the band’s two iconic Italian twin brothers, she doesn’t feel the weight of time. Rather, she feels refreshed by making music on her own terms, and calls it a “second lease on life, basically.”

As strange as the name might seem, “Adult Baby,” has nothing to do with the perverted sense of the term. Rather, it’s an exploration of perpetually feeling like an outcast and nurturing one’s inner child. Makino was born in Japan, but moved to New York as a young adult, leaving behind a painful past where she felt like she didn’t belong. “I feel like I never quite grew up, in a good way and in a bad way,” says Makino. “Sometimes it’s liberating, but sometimes it’s just so punishing, you know? I hope a lot of people feel like, ‘This is about me.’ In that sense I like it. I always like to think that I’m not the only one.”

Along with director, Eva Michon, and production company, Lief, translating the gist of her lyrics into a forty minute visual album was easy for Makino, who has a mind in which she says even sound has color. The music itself is a fantasy, a representation of Makino’s warped reality, where she’s able to space out, dream and let her thoughts run free. Often, says Makino, her friends ask, ‘Where are you, Kazu? Where is your head? What are you thinking?’”

But there’s no clear answer. In the still moments of her day-to-day life, she runs home to document a sound. “You have to catch it before it doesn’t sound like music anymore,” Makino says. “It certainly doesn’t feel like you’re making it. It’s almost like it’s out there in the air, and then you have to just kind of grab it. 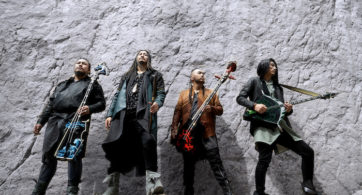 Across the vast grassy steppe, a low rumble sounds. It’s not a herd of antelope or Przewalski’s horses. It’s a Mongolian biker gang. And this gang is armed with […]