Across the vast grassy steppe, a low rumble sounds. It’s not a herd of antelope or Przewalski’s horses. It’s a Mongolian biker gang. And this gang is armed with axes—electric guitars, that is.

Despite how novel the genre may sound, Mongolian heavy metal is nothing new—it’s a scene that’s been flourishing in Central Asia for years and has garnered a devoted Western internet cult following. But there’s a group that, despite having released only two songs off of their yet-to-be-released album, is setting itself apart from the rest of the pack: The Hu. The two singles they’ve shared from their upcoming album, “The Gereg,” (earmarked with a Sept. 13 release date) have already accumulated upwards of 20 million views on YouTube.

The folk metal group was founded in 2016 in Ulaanbaatar, by members Gala, Jaya, Temka and Enkush. They’re just like any other metal band, with rolls of thunderous drums and gritty whines of electric guitars … except for a few things. The Hu make it a point to use traditional Mongolian instrument, like the horsehead fiddle, the Mongolian guitar and jaw harp. They also like to incorporate the unmistakable sound of throat singing into their music. The members harness their traditional instruments with a stage presence that has a cavalier, Western swagger to it that would look right at home on stage with the Stones or Zeppelin. Although it may seem like an unusual combination, Mongolian folk music techniques and heavy metal do indeed make a happy marriage.

Bad@ss as their lyrics are, there aren’t translations available for all the songs. “Wolf Totem”’s music video is one of the few with English translations. The visual features a crowd of Mongolian men headbanging along to the beat of drums while the lead singer snarls, “If lions come, we’ll fight until the end/ If tigers come, we’ll fight and battle … If you come with evil intentions, we’ll give you a fight/ Tens of thousands of us will hand you the wrath of Heaven.” But understanding the lyrics isn’t exactly the point. It’s more about the fact that each song is packed with powerful punches of guttural growls, staccato twangs of mouth harps, snare drums and the wails of horse fiddles. The testosterone coursing through their music is tangible. Expect to feel powerful by the end of this album, with enough vigor and gumption to cross the Mongolian plains and conquer at least a few empires single-handedly.

Another highlight off of their album is “The Legend of Mother Swan.” It’s a rousing, upbeat tune that opens with the sound of a picked banjo line, and features a charming melody that strikes a sharp contrast to the rest of the serious, somber songs on the album. Admittedly, this reviewer has no idea who or what Mother Swan is, but this tune certainly makes her sound like one bad@ss lady.

It’s hard not to fall in love with the sound of a people fighting against the cultural incursion of larger political forces into their corner of the world (*cough* China). There are veritable essays online that attempt to explain why Mongolians are so in love with heavy metal. Feel free to peruse them to try and find the answer, but perhaps this is a situation that calls for the help of Occam’s razor—maybe the genre is just cool as sh-t. 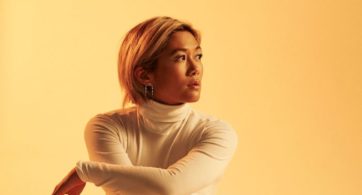 On the gray, misty day of the 2017 Women’s March on Washington, MILCK, aka Connie Lim, led a small group of singers to join the hundreds of thousands of […]