K-pop superstars BTS rocketed to the top of Apple Music’s Most Streamed Songs of 2021 with their hit single, “Dynamite.”

Although the single was released on Aug. 21, 2020, “Dynamite” ranked number one on the list of most-streamed songs globally on Apple Music in 2021. The upbeat, disco-inspired song featured all seven members of BTS (RM, Jin, Suga, V, J-Hope, Jimin and Jungkook) and brought the group its first number-one single in the United States, where it stayed on the Billboard Hot 100 for three consecutive weeks. BTS’ latest release, “Butter,” also made the list, in addition to songs from other AAPI artists like Olivia Rodrigo and YOASOBI also featured on the ranking.

This isn’t the first time “Dynamite” has been in the news, as BTS also made history in 2020 after receiving a Grammy Nomination for Best Pop Duo/Group Performance. This marked a first for the group, as well as for any Korean act in the award ceremony’s 62-year history.

BTS has continued to make waves globally since the boys’ first major appearance at an American event at the 2017 Billboard Music Awards. They’ve since been steadily gaining more international fame, collaborating with artists like Halsey, Nicki Minaj and recently, Coldplay.

The idol group shows no signs of slowing down. Their latest stops on the Permission to Dance Tour at the SoFi Stadium have brought their explosive performances to tens of thousands of fans. But if you weren’t able to snag tickets, at least you can still stream “Dynamite” on Apple Music! 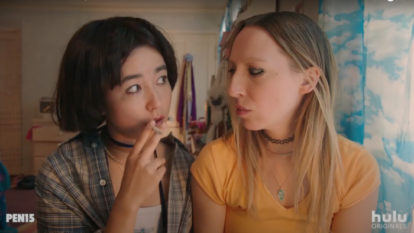 The Hulu original will be concluding with part two of its second season, slated to release on Dec. 3.