On May 27, 2015, the Coalition of Asian Pacifics in Entertainment (CAPE) teamed up with Verizon to host the second annual #IAm Live Event at Los Angeles’ Japanese American National Museum.

The #IAm campaign launched back in May in honor of AAPI Heritage Month, and it became a chance to spotlight Asian American stories in media, food and entertainment. This year, Asian American role models Cassey Ho, AJ Rafael, Seoul Sausage and Joseph Vincent had a chance to share their own “I Am” journeys with a live audience.

The night started out with some delicious food all courtesy of Seoul Sausage.

Guests were also encouraged to take pictures on the red carpet where they could instantly print their images.

The event was hosted by Kollaboration founder and comedian Paul “PK” Kim. Before introducing the guest speakers, PK cracked a few jokes about raising his three children to warm up the crowd.

“Whatever you’re doing, I’m doing with three kids,” PK joked. “Literally me being out right now is like clubbing.”

Singer and songwriter AJ Rafael was the first guest to take the stage, and he opened the night by performing one of his well-known originals, “We Could Happen.”

On stage, AJ discussed his humble beginnings and evolution as a singer-songwriter. He shared stories about his late father, who was also a musician and composer, and how he was greatly influenced by him.

“For me, it was all about the journey. The YouTube journey was really learning about your audience in the beginning and having them see you grow. That’s what I tell a lot of people who want to start content creating. It’s like they want to put up a professional thing out right away,” AJ said. “So, what I tell them is to do some vlogs, ask the audience questions. It’s a community and you can start from there. And really, there are no boundaries and don’t edit yourself.”

Although YouTube has become oversaturated with Asian American musicians and vloggers in recent years, AJ said this was not necessarily a bad sign, claiming that the Asian American community still provides strong support to its artists.

“The fact that there are a lot of Asian Americans on YouTube–I think it’s a great thing that we can create our own content and not be controlled by what’s happening in mainstream media,” he said.

After AJ shared with the audience his passion for Disney (and his impressive Batman tattoos), Seoul Sausage founders Chris Oh, Ted and Yong Kim took the stage. The trio first rose to fame when they won the third season of The Great Food Truck Race back in 2012. Since then, Seoul Sausage has continued to bring Korean cuisine into the mainstream dining experience, with one wildly popular restaurant on Sawtelle and another branch soon opening in Downtown L.A.

“We want to bring good food to good people. It so happens that we are Asian American, Korean American,” Chris said. “The reason why we put Korean flavors into a familiar form, like a sausage, is because we want to break barriers … We want to do what the California roll did for Japanese food.”

Seoul Sausage went on to talk about how they came to apply for the Great Food Truck Race, claiming that they were bored and submitted their audition video a day before the deadline. When they were casted the next day, the three Korean Americans made a pact to stay in the race at least halfway, not expecting to find so many people embracing their unique fusion dishes.

“I really didn’t think Korean food would translate in Amarillo, Texas,” said Yong, adding that the group had renamed their menu items to cater to their non-Asian customers. “But that was like our third episode, and when we got first place there, we rocked it and killed it. We [were] like, ‘I think people are ready for Korean flavors, but they just don’t know about it.’”

Indeed, Korean cuisine has been experiencing a kind of renaissance in recent years, with the emergence of several talented Korean American chefs, including Beverly Kim, Kristen Kish and Hooni Kim. When KoreAm/Audrey asked Seoul Sausage about their thoughts on the rising popularity of Korean American chefs, the trio said they were happy to see Korean cuisine garnering more media attention.

“The more of us are out there to represent, the more familiar people would be with Korean flavors and Korean chefs,” Ted said. “It’s only going to be beneficial to all of us. We’re all in this together.”

Seoul Sausage added that they recently visited South Korea to film a 10-episode web series called One Shot Seoul, which is slated for a tentative July release. The three men expressed excitement over the new culinary trends in Korea, and said they were excited to introduce them to the audience.

Following Seoul Sausage was Cassey Ho, the creator of the online fitness vlog Blogilates. She explained that she didn’t initially expect for the Blogilates channel to blow up. It all started with her first YouTube content, which was a workout video that was only intended for her previous pilates class of 30 people. But the video began garnering more and more attention from viewers all around, which eventually grew into the huge Blogilates brand it is now.

“I think the YouTube really opened up the gates for entertainment a hundred percent,” Cassey said. “Because of [YouTube] you have people making movies seen by millions of people. For me, I was able to get these DVD deals, these book deals, and all this crazy stuff because I could show that I had an audience on YouTube who wanted to see that.”

She credited YouTube for her success as well as many other Asian American entertainers; however, she’s also noticing that there has been a decline in new Asian American YouTubers since she began.

“Then when I started getting into it, like a year or two later, I noticed that a lot of the influencers were Asian (like Michelle Phan, Wong Fu Productions, Ryan Higa). But today, I actually notice that there’s less new Asian people. It’s really interesting,” Cassey told KoreAm/Audrey. “I feel like because YouTube is becoming more like ‘Hollywood,’ now there’s almost some type of glass ceiling where it’s harder for Asian people to break in.”

Cassey shared her fitness tips with curious audience members, but also reminded them that vanity reasons should not be your main goal. “I think a lot of people get into fitness for vanity reasons. Of course, you want washboard abs or sexy slim legs. That’s fine. But with my channel, I try to educate people and let them know that yes, you can work towards that, but you’re not going to find happiness in just that physical vanity. You have to enjoy the process.”

After Cassey shared her last words on positivity and motivation, the acoustic singer-songwriter Joseph Vincent stepped onto the stage where he serenaded the audience with the never-before heard song “My Girl.”

Setting his guitar aside, Joseph Vincent settled into the hot seat when PK commented on the singer’s recent travels (as seen on his Instagram). The singer explained that he’s been touring, mentioning that listeners at his shows are a whole new demographic for him due to their young age. He then shared a fun story about one of his most memorable shows.

“I went to Sweden and they wanted me to do an acoustic act prime time at a nightclub. They play EDM stuff. I’m like, ‘Are you sure? Do you know what I do?’ They’re like, ‘Yeah, it’s fine. Bring your acoustic guitar and go on at 12:30.’ I’ve experienced a lot of cool things like that. It’s good to challenge yourself and try to put yourself in very comfortable situations and see how you’ll come out,” said Joseph.

When one aspiring musician in the audience asked Joseph for career advice, the singer-songwriter stressed the importance of social media platforms when it comes to publishing content.

“Make a YouTube channel, all the social media platforms. Take advantage of it. All of them are free, right? Facebook, Twitter… Just get your social media presence out there. Essentially, do it because you want to do it,” he advised. “Put music out and take the criticism in stride, and use it to better yourself. Don’t ever get discouraged. Don’t let anyone you can’t. ”

Joseph closed the questions segment with his predictions about Asian American produced music reaching the mainstream scene. “It would open up the floodgates. It would give a lot of us opportunity. Just to put it out there, it would make us a little more relevant again and something to jump onto. It’s gonna happen eventually,” he said. “I think it’s just our turn to go.”

PK thanked Joseph Vincent for his time, and called on Cassey Ho, Seoul Sausage and AJ to come back onto the stage for a photo opp.

The group did one final pose for everyone: the iconic two-finger peace sign.

You can learn more about CAPE on their official website. Check out the videos for this year’s #IAM Campaign speakers here.
___ 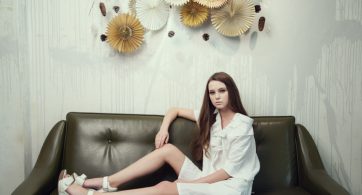 For those of you keeping up with all the street styles coming out of Asia, we found a great designer with clothing accessible to stateside shopping fanatics! Meet […]