Kids will be kids, even if they have years of being on television and movie sets under their belt. Rising stars Albert Tsai and Miya Cech are wise beyond their years, but they still have that gleam of childlike wonder in their eyes. They sat down on Zoom to discuss their latest projects, favorite moments on set and love of the Harry Potter series.

Tsai is best known for his roles on shows like “Fresh Off the Boat,” “Crazy Ex-Girlfriend” and “Dr. Ken,” and the Dreamworks animated film “Abominable.” He currently stars in Disney Channel’s “Coop & Cami Ask the World” as Fred, the loyal and quirky best friend of Coop Wrather.

Cech has appeared on various television series including “Hawaii Five-0” and “American Horror Story,” and played the younger version of Ali Wong’s character in the 2019 romantic comedy, “Always Be My Maybe.” She also recently starred in Nickelodeon’s action-adventure series, “The Astronauts” as Samantha Sawyer-Wei, one of five children who must find their way back to Earth after they are accidentally launched into space.

During the conversation, Tsai and Cech discovered that they had many things in common, including their similar Bay-area roots and their shared Hogwarts’ house. They then shared stories about working on set (pre-pandemic) when Tsai brought up all the fun costumes his character wears on  “Coop & Cami Ask the World.” “One of the funniest things [I dressed up as] was a centaur,” Tsai recalled. “They had to have another guy in the back as the hind legs of the centaur. It was my stand-in and he had to hold onto my hips while we had the centaur costume over us and we had to practice how to move as one.”

Tsai was also curious about the stunts done on “The Astronauts” to make the actors look like they were in space, to which Cech revealed the various equipment the production used. “We went on this big contraption called a parallelogram,” she explained, describing the large rig that held only her shins in place while it raised her up to simulate zero gravity floating. “You kind of have the ability to turn your body and push yourself up and down. But that was easier for when there were places where we couldn’t put the wires.”

In addition to discussing the technical side of their favorite on screen moments, they also talked about their mutual desire to someday work behind the scenes as well. “Hopefully if I become a director, we should do something together,” Cech suggested with a smile on her face. “Yes!” Tsai agreed, enthusiastically. “We should make, like, a movie together. That’d be so awesome.”

Watch the full conversation above, and catch Tsai’s and Cech’s highlights below! 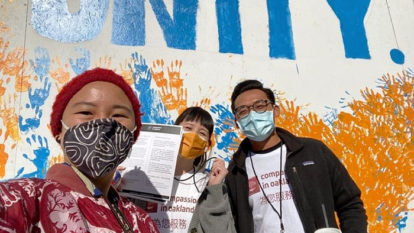