With video games continuing to rise in prominence, the voices behind some of the fans’ favorite characters are stepping out of the booth and into the spotlight. Voice-over actors Charlet Chung and Erika Ishii meet for the first time and sit down virtually to discuss being a part of some of the biggest games out there, representation in the gaming industry and much more.

Chung is best known for her voice work in the popular first-person shooter game, “Overwatch,” as D.Va, a former professional eSports gamer who is recruited to help defend Earth from robots known as “Omnics.” Meanwhile Ishii recently joined the “Apex Legends” family as the voice for Valkyrie, a bold and brash Legend (the name given to playable characters in the game) who specializes in flight with her state of the art jetpack.

After initial introductions, Ishii admitted to being a fan of D.Va and how important it was for her to see the character as an Asian American woman trying to get into games. Chung agreed, bringing up a more personal connection she has to the character. “The things that have always brought me down or made me feel insecure are the things that D.Va embodies in a positive way,” she explained. “I’m small, I’m a person of color, I’m a female, I sound young, I look young and all these things that I saw sometimes as a disadvantage … I saw her embody in a way that was portrayed [as] strengths.”

Ishii had a similar relationship with her character, Valkyrie. “It’s truly wild to be a fan of the game and of the lore … and suddenly you’re in it,” she gushed. “[I] play a character who is super cool and she’s also a lesbian and she has [my] same sort of heritage … It sounds like it was written for me.” Ishii went on to say how much of herself she put into voicing the character: “There is so much of me and what I wanted to be in media in her.”

The two also discussed their experiences with inclusion, as Chung was once a part of the annual ABC Discovers talent showcase. “It’s really neat to see a class of actors, that are mostly people of color, grow in their own right and to be able to support each other in that way has been a joy to be a part of,” she said of the program, which aims to help ABC recognize and provide opportunities for emerging talent.

“The people who have the most credits … and who have the most connections are white and mostly men,” Ishii added about how the entertainment industry is evolving. “And so to bring in this new pool that specifically has been overlooked is fantastic and I see that more and more now.”

Watch the full conversation above, and play Overwatch and Apex Legends, out now! 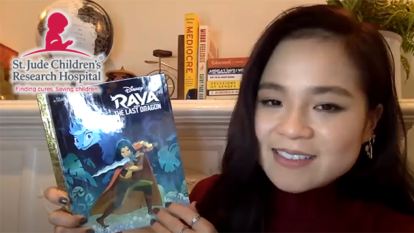 Ahead of “Raya and the Last Dragon”‘s home release, Disney and St. Jude Children’s Hospital spread joy through virtual events for patients and supporters.