With the advent of Chloé Zhao’s Oscar wins, audiences are increasingly excited to see the perspectives of Asian female directors. As visionaries in their own right, Maritte Go and Sujata Day are prime examples of incredible talent with incredible stories to tell.

Go is the director of “Black as Night,” one of Blumhouse Productions’ latest films in their “Welcome to the Blumhouse” event streaming exclusively on Amazon Prime Video starting Oct. 1. The film follows a young Black girl in New Orleans who finds confidence by hunting the vampires that torment her city. Meanwhile, filmmaker and “Insecure” actor Day directed, wrote and starred in “Definition Please,” a comedy-drama centering around a former national spelling bee champion who must reconcile with her estranged brother when he returns home to help care for their ailing mother.

The two directors took time to reconnect after their first meeting at the 2018 HBO APA Visionaries short film competition, where Go was one of the winners and Day was an ambassador, this time each equipped with a feature film that resonates deeply with them.

“Definition Please,” while not autobiographical, borrows much from Day’s early life, as her movie explores mental health and failing to live up to one’s expectations. “It was written after Indian American kids that I grew up with—that I’m friends with—that actually suffered from mental illness at the time,” she revealed. “And we were unaware of how to communicate about what was going on.”

On the other hand, Go’s Blumhouse debut comments on colorism, an issue that plagues not only the Black community but the Asian community as well. “I remember growing up and … my family members would say, ‘Don’t be out in the sun for too long or you’re going to get too dark,’ like that’s a bad thing,” Go said. “I really did relate to that because Filipinos go through that and Asjha Cooper, who we cast as the lead, very much relates to the story.”

Go and Day are not afraid to get personal or vulnerable in their filmmaking, both agreeing that some of the best stories are built from personal experiences. “Tell your stories no matter how small you think it is—no matter how much you think, ‘Oh, people aren’t going to want to see this on screen,” Day said. “Don’t put down your experiences and what you’ve been through.”

“Take your own story because what makes you so special is what’s going to make your story stand out,” Go added. “You’re going to connect with so many people … and it validates your experience [too].”

Watch the full conversation above for more! 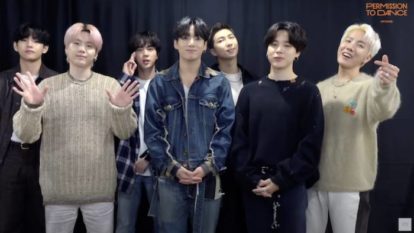 Get ready for four nights of BTS at Inglewood’s SoFi Stadium.