Jessica Henwick and Simu Liu took a break from kicking ass and breaking box office expectations to have a heart-to-heart talk in the first Character Conversations video from the 19th Annual Unforgettable Gala.

Henwick stars in the recently released “The Matrix Resurrections” as the headstrong Resistance fighter Bugs. She is also known for her role as Colleen Wing in the Marvel Cinematic Universe, where she appeared in “Iron Fist,” “The Defenders” and “Luke Cage.”  Henwick is also set to star in “Knives Out 2,” the highly anticipated sequel to “Knives Out,” which is slated for a 2022 premiere.

Meanwhile, Liu, who’s best known for his role as Shang-Chi in the Marvel blockbuster “Shang-Chi and the Legend of the Ten Rings,” also starred in Canadian comedy “Kim’s Convenience” as the family’s eldest son Jung. In 2022, Liu is set to lead the romance film “One True Loves” alongside Phillipa Soo.

As the two action stars sat down, they discussed the hard choice of Anglicized stage names and quickly addressed the elephant in the room. As recently reported in IndieWire, Henwick turned down a potential role in “Shang-Chi” to instead audition for “The Matrix Resurrections.”  But rest assured, there’s no bad blood between the two actors due to the decision. Liu was more curious about the reasoning for Henwick’s decision. “First of all, I’m so incredibly happy for you,” Liu said. He then went on to ask about Henwick’s decision-making process, adding, “That’s a tough position for you to be in.”

The two also talked about how to separate their public persona as well as their private life. Henwick spoke candidly about the topic, stating that every actor needs private time. “Acting is like an elastic band,” she said. “You can keep stretching … and eventually, it’ll snap. You have to let it go back to its normal state once in a while.”

Liu and Henwick also reflected on their careers so far, their roles in the MCU, the usage of martial arts with Asian characters and much more. Watch the full video above to see the rest of their conversation! 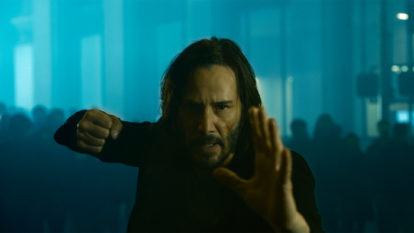 Keanu Reeves, Carrie-Anne Moss and director Lana Wachowski are back for an action-packed, but difficult to follow fourth sequel.