Written and executive produced by Davidson, “Bupkis” is described as a fictionalized, heightened version of Davidson’s own life. The series was co-written with Davidson’s longtime friend and collaborator, Dave Sirus, as well as showrunner Judah Miller.

In an interview with The Face, Wonders recalls working with Davidson on the A24 slasher hit, “Bodies Bodies Bodies.” “He’s hilarious!” she said. “We had a lot of dark exchanges in the movie, so it was nice to have some relief outside of that, to have a good guy who can bring levity and humor to the role. He’s also a total pro who’s very good at dramatic acting.” The actress also harks back to when she tried her hand at stage-acting during her first year at Harvard. Wonders played the part of Irina in Chekhov’s “Three Sisters,”  which was met with brutal criticism from fellow students. “I didn’t have thick enough skin, [so] I wanted to be the anonymous person behind the camera, writing,” she said.

Thankfully recovered from that traumatic theater experience, Wonders has continued to write and direct her own projects, in addition to acting in front of the camera. Along with “Bupkis,” Wonders will also take on a lead role in the upcoming Apple TV+ crime drama series, “City on Fire.”

We’re excited to see Chase work wonders in her upcoming projects. Be sure to check out “Bupkis” once it’s streaming on Peacock! 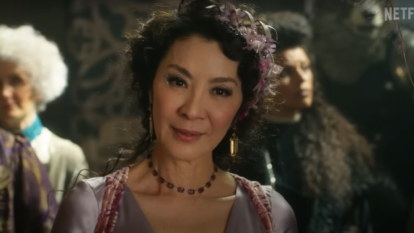 Adapted from the best-selling YA fantasy series by Soman Chainani, Netflix brings this epic tale of magic, destiny, and friendship to the screen just in time for spooky season.