Earlier this year, Henry Golding caught everyone’s attention after being cast to play the lead on Jon Chu’s “Crazy Rich Asians.” The Singapore-based actor has again been cast, in an upcoming thriller called “A Simple Favor,” according to the Straits Times.

Directed by Paul Feig and co-starring Blake Lively and Anna Kendrick, “A Simple Favor” will be adapted from Darcey Bell’s novel of the same name, and will center on a woman trying to get to the bottom of her friend’s mysterious disappearance. Lively will be playing the lead while Golding will appear in the film as her character’s husband.

Golding joined the all-Asian cast of Chu’s film adaptation of the Kevin Kwan novel “Crazy Rich Asians” in March, and will star opposite Constance Wu.

Golding is a Hollywood newcomer and hadn’t a single feature film credit to his name before he won the lead role. He will be playing Nick Young, heir to a wealthy Singaporean house who brings his middle-class girlfriend (Wu) home to meet his obscenely rich and equally overbearing family. 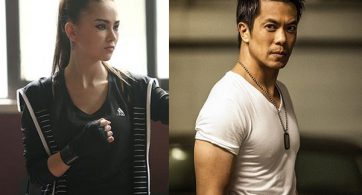 Byron Mann and Taiwanese actress Hannah Quinlivan will be joining Dwayne Johnson, Chin Han and others in “Skyscraper,” an action thriller from Legendary Pictures, according to Deadline. The film […]