2020 is almost upon us, but somehow, stories of Hollywood pay disparity are still making headlines. Just this week, it was revealed that “Crazy Rich Asians” screenwriter Adele Lim would not be continuing her work with the film’s sequels due to the massive wage gap between her and her white, male co-writer, Peter Chiarelli (“The Proposal”).

Sources report that Warner Bros. offered Chiarelli between $800,000 and $1 million for his work on the sequels, while Lim’s offers were in the $110,000 range. Though Warner Bros. higher-ups point to Lim’s lack of feature film experience as the reason for the disparity (and later upped her offers on par with Chiarelli’s) netizens across the globe are outraged—as is Lim herself. Chiarelli reportedly offered to split his pay with her, but she declined, saying that while her co-writer has been “incredibly gracious,” her salary shouldn’t be determined by the “generosity of the white guy writer.”

Although director Jon M. Chu hoped to preserve the original creative team for all sequels, he has been tight-lipped about the departure thus far. “There’s too much responsibility and too much precedent from the first movie that the last thing I want to do is just hit a date and release the movie,” Chu told “The Hollywood Reporter.” “There’s still too much work to do. Our focus isn’t on the timeline, it’s on getting the story right.” 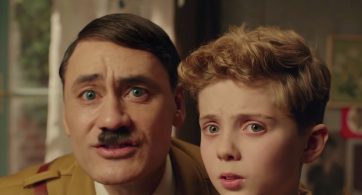 Many an actor has taken on the task of portraying history’s arguably most reviled man, from Anthony Hopkins to Charlie Chaplin. Now, director Taika Waititi (“Thor: Ragnarok”) is taking […]