The seven-member group garnered attention for being the first act to debut under Universal Music Group Korea, releasing the single “Doom Doom Ta” back in early 2021. Today, TRI.BE revealed its partnership with the new Cartoon Network series “We Baby Bears” by unveiling the series’ theme song, “The Bha Bha Song.”

Whimsical as it is colorful, TRI.BE’s new music video showcases the band members dancing in flashy outfits, eating pizza and scolding three animated baby bears. The audience also gets a sneak peek of what the new show will look like at the end of the video, during an animated section where the three bears ride a shooting star around a galaxy full of bear-shaped planets and bubbles.

“We Baby Bears” is the brainchild of animator Daniel Chong, creator of the show’s predecessor “We Bare Bears,” which ran for four seasons on Cartoon Network. While the latter series followed three brother bears, Panda, Grizzly and Ice Bear through the wilds of San Francisco, the new prequel will cover the three bears’ journey to find their forever home.

Check out the theme song and music video below! 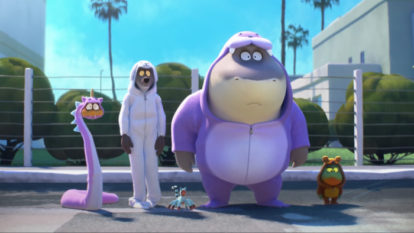 The Big Bad Wolf is done eating grandmothers and blowing down houses, and is instead trying to do some good in the latest trailer for “The Bad Guys.” On […]