I am a stuntman, with both hands in the sky
Will I live another day, or will this be the day I die
I am so alive, with such endless possibilities
No one can hold me back, everything is new to me

So reads the bridge from Dan Matthews’ single, “Stuntman,” which also features the powerful vocals of Priska. The Korean American rapper, who also goes by DANakaDAN, released the music video for the track last week. You can give it a listen below and purchase his album, Stuntman, on iTunes.

The song is produced by Paul Dateh and mixed by Travis Graham. The music video is directed by Jon Maxwell, who also directed Matthew’s documentary, aka DAN, which follows his journey to reunite with his birth family in South Korea, including a twin brother he had never known. ISAtv, Morrow Pettigrew and Eugene Choi are listed as producers.

Matthews was featured on the November 2013 cover of KoreAm. You can also watch the entire documentary on DANakaDAN’s YouTube channel.

This past Friday, Matthews performed at the digital media conference V3Con at the Japanese American National Museum in Los Angeles. He even got Vision Award winner Ann Curry to dance on stage with him. Check it out in the video at the 9-minute mark. 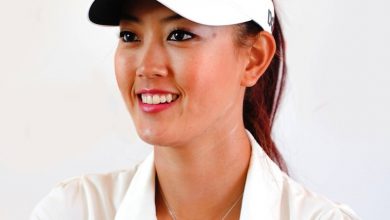 by JULIE HA She did it. Michelle Wie just scored the biggest win of her career. Just minutes ago, the 24-year-old golfer won the U.S. Women’s Open at Pinehurst, […]