Ali Wong and Randall Park have found a pair of co-stars in Daniel Dae Kim and Keanu Reeves for their upcoming Netflix rom-com film “Always Be My Maybe.”

The film follows Sasha (Wong) and Marcus (Park), childhood friends who drift apart and reconnect 15 years later. Sasha enjoys a career as a celebrity chef looking to open a new restaurant in San Francisco where she once again runs into Marcus, her old friend who is now a struggling musician.

According to Deadline, no news has yet been released on the roles that Kim and Reeves will play in the Netflix comedy. Audiences will next see Kim in the upcoming “Hellboy” reboot, where he will be stepping into the part of Ben Daimio. His production company 3AD’s series “The Good Doctor” was a breakout success on ABC last year. Reeves is currently filming the third installment of his “John Wick” film series.

Park’s “Fresh Off the Boat” showrunner Nahnatchka Khan is directing the comedy for Netflix. Filming is underway in Vancouver. 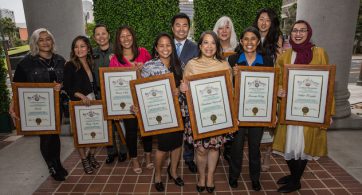 To close out Asian Pacific American Heritage Month, Los Angeles honored Tuesday a group of female activists and advocates whose portraits have hung in a gallery inside City Hall throughout […]