One night a month, Jeff Jun’s Lavanderia in Santa Ana, Calif., transforms into a hub of good, clean love.

From the outside, this place with the word “Lavanderia” in big blue letters plastered on the storefront window appears your run-of-the-mill laundromat, located on a major thoroughfare in the city of Santa Ana, Calif. But stop by on the third Thursday of any month, between 8 and 10 p.m., and you will hear more than the clanking of coins being deposited into machines or the vigorous swishing of washers and whirring of dryers. You will hear conversation. You will hear laughter. You will see smiling children sucking on lollipops, engaged in coloring books or playing in the aisles. You may even see grown-ups dancing to Britney Spears or Wonder Girls tunes blaring out of a jukebox, as others clap in encouragement.

Welcome to Laundry Love Santa Ana. One evening per month, owner Jeff Jun’s Lavanderia, at 406 E. Santa Ana Blvd., undergoes this transformation from a place to wash clothes to a community of goodwill.

On these nights, he opens his doors to homeless people, the working poor and others in need for a night of free laundering services. The effort is part of a social justice initiative started by a group of local do-gooders and modeled after the national Laundry Love movement, which pairs laundromats with local volunteers who provide coins, detergent and, often, a shoulder, a hand, an ear to those in the community who are struggling financially. For these individuals, clean clothes—a basic need that’s often overlooked in charitable giving—are a luxury.

A handful of volunteers in Orange County—apparently inspired to do good by their Korean American Christian pastor, Dave Gibbons, of the Irvine-based New Song Community Church—heard about the national Laundry Love project and decided to start one in Santa Ana. Their first challenge: finding a Laundromat whose owner would commit to the once-a-month philanthropy and welcome a population that often gets shunned. To their delight, Jun, an immigrant from Korea who has run the 4,000-square-foot laundromat since 1989, agreed on the spot to their proposal. That was two years ago. To this day, not only does he still open up his facility for the project, but he also donates money back to it.

“He’s genuinely a great guy,” said Paul Chiu, one of the founding volunteers of Laundry Love Santa Ana. “Which laundromat owner would let people come in and do this, and at same time, donate money back to the cause? He’s always there [at Laundry Love events], wearing a straw hat and a great big smile on his face, passing around lollipops. He puts money in the jukebox. It makes the environment more festive. We’re so grateful.”

Jun, who studied engineering in South Korea, used to run a gas station after first immigrating to the U.S. with his wife in 1980. “I got robbed about three times. Ah, it was bad,” recalled Jun, during an interview at last month’s Laundry Love event. “I thought to myself that I didn’t want to risk my life like this just to make a living. I thought I should do something safe. Instead of a lot of cash, maybe something to do with coins.”

The laundromat business has been good to him and his family for 20 years, and Jun is grateful.

“Instead of holding onto money, I thought it would be great to let go and give back from time to time,” he said. “As you get together with people by doing this, you learn how to live with people. What’s life? It’s just giving and receiving among people.

“When you’ve eaten much, you’ve got to let it out.”

Over the past two years, the Santa Ana project has given quite a bit, helping some 600 patrons by doing 1,500-plus loads of laundry and raising more than $5,000 for the cause. Volunteer Scott Overpeck, who has been leading the local effort, said that when he and others started Laundry Love in their area, there were 20 such efforts across the nation. Now there are about 140, and Santa Ana’s is one of the largest. Moreover, former members of their team have since started Laundry Love projects in the cities of Orange and San Jose. And, even two years in, there is no shortage of volunteers, half of whom are Korean American, said Overpeck.

He believes there’s a deeply attractive appeal to a project like Laundry Love that’s different from other charity initiatives like working in a soup kitchen, in part, because laundry is a long and tedious process. “So there’s a lot of time to sit there and invest in people’s lives. It forces interaction,” he said. “Barriers are broken down. I saw an accountant who came out to volunteer and he saw another accountant standing in line to get his laundry done. Six months ago, they could have been competitors or co-workers.

“You stop viewing the people we’re serving as ‘others,’” Overpeck added. “Rather, they’re just people in different situations right now. [Laundry Love events are] like going to hang out with friends, rather than serving a population.”

Patron Jose Gonzalez, who is homeless, said he senses and appreciates that the volunteers aren’t just there to provide coins and soap. “People here take their time to get to know you,” he said.

“The last time I was here, it was a [homeless] girl’s birthday, and they brought a cake. They shared the cake with everybody. That was to me, like, ‘Wow.’”

That spirit of goodwill is infectious. One woman, who identified herself by her street name Artie, said she had heard about the free laundry service from a fellow homeless friend and decided to try it out last month. “I didn’t know it was a laundromat. I thought there was a party in there!” she said, laughing. “It’s so loud and cool. Everyone’s happy.

“Whenever somebody gives like this, when people get together like this,” she said, “you want to pass it on. If I weren’t homeless, I wish I could do something like this.”

Jun admitted the monthly project has not been without some inconveniences. He noticed, for example, that regular customers tend to drop off for a couple days following the Laundry Love Thursdays because they think the machines are dirty after the homeless people do their laundry there. Someone even recently sued the owner after Laundry Love partnered with a local nonprofit to bring in a mobile clinic to the event because the medical booths were apparently occupying parking spots for the disabled. But these incidents haven’t deterred him.

Smiling, Jun said it’s sometimes still hard to remind himself to let go of the desire to make more money and to help others “with a cheerful heart.” He is partly motivated by something larger than just his own charitable instinct. “I wanted to change the perception about Koreans, too,” he explained. “Koreans, to be honest, are often viewed as greedy business owners who never share with the community. Especially in a city like Santa Ana, where there is a large Hispanic population, I wanted to change that perception a little bit.”

“The owner, the volunteers, they all show effort,” said a 47-year-old patron who declined to give his name. “This place has got a good heart. Look how many people are able to wear clean clothes tonight. They can get by for, like, the next two to three weeks. It’s helpful. It’s hopeful.”

This article was published in the December 2011 issue of KoreAm. Subscribe today! 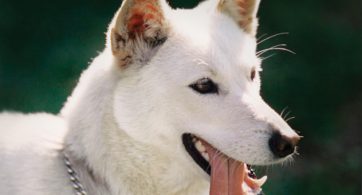 Photo credit: Hyungwon Kang by EUGENE YI It would have made a wonderful story. South Korean Jindo dog enthusiasts donated two puppies to the K-9 division of the Los […]