Dia Frampton, champion of the disenfranchised, is occupying the meadow in a new video for her debut solo album.

The singer and runner-up on reality singing contest “The Voice” will be releasing her album “Red” on Dec. 6. The first single is “The Broken Ones” and the video features Frampton’s sister Meg and other members from the sisters’ band Meg & Dia. In addition, three of Frampton’s little sisters (it’s a family of six girls!) also served as extras in the video, playing “broken” people.

“They needed girls so I told them to let my little sisters do it,” Frampton told charactermedia.com in a phone interview.

David McClister, who directed the video, told The Hollywood Reporter that the video is a cross between “‘Where the Wild Things Are,” “Lord of the Flies” and the lost boys from “Peter Pan.”

In the video, Frampton sings and plays piano in a woodland hideaway for a bunch of orphan-looking teenagers. They are invaded by some woodland toughs and after a furious battle (spoiler alert!), emerge victorious.

Frampton said she wanted to show her family some of the behind-the-scenes aspects to her job.

“I’ve been doing this thing for awhile I feel like it’s one of those jobs that you can talk about it but nobody understands what it means,” Frampton said. “They got to see what goes on with a video shoot and see how I woke up at 3:30 in the morning and be ready to shoot at 6 a.m. to get the good light. We were there for 16 hours and they got to see what I do.”

Frampton will be the opening act for her “The Voice” mentor, country star Blake Shelton, whose 26-date tour is set to kick off in January. Shelton, known for his somewhat brash demeanor, tweeted earlier today: “If you haven’t downloaded Dia Frampton’s ‘The Broken Ones’ there’s a real good chance you’re not getting laid this weekend…”

“The Broken Ones” was released on iTunes on Nov. 15.

Dia and her sisters and mother (far right) on the set of “The Broken Ones.” 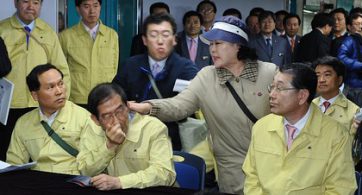