A Hong Kong tabloid is reporting that Donnie Yen is set to join the galaxy far, far away as a Jedi in the Episode VIII installment of the new trilogy.

According to Apple Daily, the 51-year-old star of Ip Man is set to begin filming scenes with Harrison Ford in London next month. Yen is apparently a Jedi who meets Han Solo and becomes an ally.

The tabloid also claims Yen was confirmed for the role a month ago over eight other actors, including Jet Li, Tony Leung Chiu-Wai, Wang Leehom, Chang Chen, Daniel Wu and Stephen Chow, but is under an agreement not to go public with the news. Apparently, Yen and Li were the frontrunners for the role, but Disney went with Yen, whose fee per movie ($4 million) is lower than that of Li’s ($10 million).

The rumor is drawing some immediate skepticism: Film blog /FILM noted that the status of the Jedi in the upcoming Star Wars: The Force Awakens is relatively unknown, and there’s no way to confirm whether Yen would play a Jedi in the next film. Additionally, Episode VIII isn’t even close to beginning production yet, so Yen filming scenes with Ford next month doesn’t make sense.

However, there are more substantial rumors about director Gareth Edwards, who is helming the spin-off Star Wars: Rogue One, looking at a number of Chinese actors for a role. The film just began shooting last week, so Yen being attached to a Star Wars movie would make more sense in this context. But Rogue One isn’t supposed to have any Jedi, so Yen’s role would be different.

No matter what comes of the Donnie Yen rumors, there will be Asians in Star Wars: The Force Awakens. Iko Uwais, star of the acclaimed Indonesian action movie The Raid 2, will be part of the cast along with co-stars Yayan Ruhain and Cecep Rahman.

The galaxy far, far away is back in theaters on December 18 with J.J. Abram’s Star Wars: The Force Awakens. Star Wars: Rogue One is set for a December 16, 2016 release, and Star Wars: Episode VIII will follow just months later on May 26, 2017. 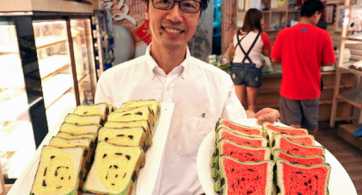 Summer is already in full swing! During all these barbecues, long days at the beach and pool parties, you know that watermelon is always bound to be at hand. This […]