The teaser spares no time diving into the chaotic family of our main character Joe (Jo Koy), as he returns with his son (Brandon Wardell) for what he affectionately calls the “Filipino Superbowl”—better known as Easter Sunday. Joe must find a way to keep himself and his family sane as his mother (Lydia Gaston) and Tita Theresa (Tia Carrere) bicker endlessly and his cousin Eugene (Eugene Cordero) gets everyone involved with some shady individuals because of his money issues. You can also catch a quick peek at Eva Noblezada, as she gives Joe’s son a rundown of what to expect with Filipino families. It’s a tiring task, but there’s no one better than Joe to keep this messy family together. As Joe’s sister Regina (Elena Juatco) tells him in the trailer, “We’re counting on you to fix it.”

According to a press release, “Easter Sunday” is a love letter to Koy’s own Filipino American community, but also features an all-star cast of comedic heavy hitters like Tiffany Haddish (“Girls Trip”), Jimmy O. Yang (“Space Force”) and many more. The film was directed by Jay Chandrasekhar (“Super Troopers 2”) and written by Ken Cheng (“Chinese Comedian”).

Be sure to catch Joe and his chaotic family on August 5, when “Easter Sunday” releases exclusively in theaters. In the meantime, catch the full trailer below! 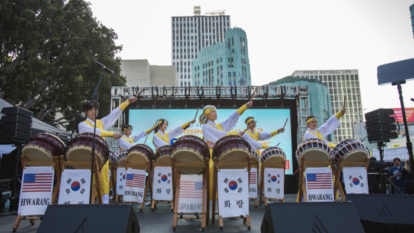 On April 29, the Asian and Black communities came together at Los Angeles’ Liberty Park for the 30th anniversary of the L.A. Riots.