Actually, the Korean American Navy officer and NSA code-breaker technically turned 99 last month, but about 175 of her admirers gathered Jan. 18 at the Bonaventure Hotel in downtown Los Angeles to celebrate her centennial birthday, based on Korean age. Cuddy grew up the eldest daughter of two of the most revered Korean independence patriots (and among the earliest Korean immigrants to the U.S.), Dosan Ahn Chang Ho and Helen (Hye Ryon) Ahn. The couple’s tireless work to liberate their mother country from Japanese colonization would play a crucial role in Cuddy’s upbringing, identity and values. At the same time, their heroic shadow didn’t seem to keep her from paving her own unique and trailblazing path. Here’s a look back at the incredible life of Susan Ahn Cuddy.

Susan Ahn is born in Los Angeles on Jan. 16, 1915, the third child of Ahn Chang Ho and Helen Ahn, the first married couple from Korea to arrive in America, in 1902. Their Korean passports were 51 and 52. Susan’s name—“Soo-san” in Korean—means “embroidered mountain.” In this photo, Susan is pictured with her parents, older brothers Philip and Philson and baby sister Soorah. The youngest, Ralph, was not yet born.

With her parents so active in the movement to liberate Korea, she would grow up in a home that also served as the center of the small Korean community in L.A., hosting at one time or another a cumulative total of a few thousand Korean immigrants, then without country. Here, Susan is pictured in 1924 with members of Hungsadan (Young Korean Academy), an organization her father and other patriots founded in the U.S. to nurture young people of good character, who they hoped would eventually lead an independent, democratic Korea.

Susan (standing in the flower garden in front of her L.A. house in this photo), said her father loved to plant flowers, even as her pragmatic mother—often playing the role of single working mom while her husband was away—insisted on planting squash and cabbage. Even in the letters he wrote from a Japanese prison, where he was often subjected to torture, Ahn Chang Ho would encourage his daughter to keep up the garden meticulously. “That is one way to foster the good habit of loving beauty,” he told Susan in a 1934 letter. Though he was an absentee father, Susan described him as “loving” and “understanding.”

After Japan bombed Pearl Harbor and brought the U.S. into World War II, Ahn—whose father had died in 1938 after years of torture at the hands of the Japanese—enlisted in the armed forces, becoming the first Asian American woman in the U.S. Navy. When she traveled to places like Cedar Falls, Iowa, and Atlanta, Ga., for military training, she would often turn the heads of people shocked at the sight of an “Oriental,” especially one in uniform.

By 1943, she would become a Navy LINK instructor, teaching fighter pilots how to maneuver in a simulator plane that looked like a miniature Hellcat. She would first have to master 100 hours of “flying” time herself. The 44 female instructors chosen for this program would cheer when their commander allowed them to wear slacks, instead of skirts, in the simulator cockpit. “A lot of people thought that women didn’t belong in the service. That made us try harder,” Ahn said.

Now “Ensign Ahn,” she would become the first female gunnery officer in the Navy, entrusted to train fighter pilots in air combat tactics and how to shoot down enemy planes. When one seasoned pilot protested taking instructions from this 4-foot-11, petite Asian woman, saying, “I don’t shoot until I see the whites of the Jap’s eyes,” she was not shaken. She replied, “I don’t care what you do up there. Down here, you will shoot when I tell you to shoot!” And he did.* These pictures show Ahn (above) at the shooting range and (inset) training a sailor on a machine gun.

Lieutenant Ahn would join the Navy’s elite code-breaking team, earning a reputation as quite the puzzle solver because of her vast knowledge of everything from world affairs to literature, which were often used in secret codes. Later, she would become a civilian officer, with two stripes, for the National Security Agency (NSA). She would eventually lead a department of 300, who were charged with digging up Russian intelligence during the Cold War. Her nickname was “Little Hitler.” Her son, Philip “Flip” Cuddy, said she once told him that her underlings “had to perform their duties, or they were gone.” She stands out in this 1956 photo with her NSA peers, who at the time were cramming to learn about Southeast Asia.

Even Ahn’s act of marriage in 1947 to fellow NSA code-breaker Frank Cuddy, who was white, would prove a trailblazing act, as anti-miscegenation laws prevented their union. Fortunately, the couple found a Navy chapel in Washington, D.C., that would marry them. (Frank apparently shopped everywhere for a ring that was shaped like a lotus flower—a request from Susan, who had loving memories of the lotus flower pond her late father built at their L.A. home.)

After finding out her daughter had secretly married a non-Korean, Susan’s mother didn’t talk to her for five years. Helen Ahn would eventually come to accept the marriage and was a doting grandmother to her grandchildren, Christine and Flip.

After attempting to balance stressful NSA work with being a mother to her two children, Cuddy would leave the intelligence community in 1959 and return to Southern California. She worked at her siblings Philip and Soorah’s popular Chinese restaurant, Moongate, in Panorama City, while also staying involved in her children’s school activities. Here, she is pictured at Moongate, with Soorah and Philip, a pioneering film and TV actor who challenged racial barriers against Asians in old Hollywood.

Susan, along with older brother Philip and her children Christine and Flip (far left), would meet South Korean President Park Chung-hee in November of 1973, at the reburial ceremony of Ahn Chang Ho and Helen Ahn (who passed in 1969) at Seoul’s unveiled Dosan Park. Susan’s parents were together again at last in a free Korea. Susan has called her mom “the strongest woman I’ve ever known.”

After older brother Philip Ahn’s death in 1978, Susan would spend the next decades largely taking on the role as family representative, as well as Ahn family history archivist, utilizing her meticulous organization skills from her intelligence work. In this 1984 photo, she, with brothers Philson (right) and Ralph, unveil their late brother’s star on the Hollywood Walk of Fame. He was the first Asian American film actor to receive this honor.

Active in civic and community affairs, Cuddy, also a breast cancer survivor, has received numerous awards, from the L.A. City Council, California State Assembly and the Asian American Justice Center. A biography of her life by John Cha, Willow Tree Shade: The Susan Ahn Cuddy Story, was published in 2002. Even at age 93, Cuddy riled up a crowd of 9,000 at a Barack Obama rally at UCLA before the California primary in 2008. “I see echoes of my father in him,” she said about then presidential candidate Obama, “in his ability to inspire people to take action.”

Often addressing younger crowds, like this group from the L.A.-based K.W. Lee Center for Leadership (carrying the Korean Independence Movement flag from a 1919 parade in Philadelphia), Cuddy continues to be a role model for Korean American youth, who are inspired by her courageously unconventional life. “I have never felt sorry for myself,” Cuddy said in 2009. “I think as far as racism is concerned, it’s how you [respond to] it.” When once asked if she had any regrets in her life, she replied that she had none. “I achieved what I wanted to, and I’m very fortunate to have two wonderful children,” she said. To find happiness, she encouraged, “Do your own thing.” 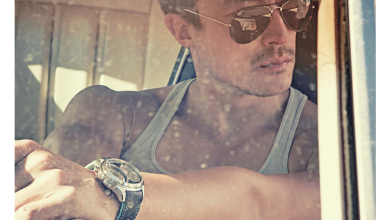 Saying that we love Daniel Henney may be a bit of an understatement. After all, Henney was featured as our Daily SHAG (Smoking Hot Asian Guy) three different times. […]