Paolo Ballesteros, a Filipino host and actor, has suddenly been making headlines internationally. Surprisingly, it’s not his acting and hosting skills that’s given him viral attention. It’s actually his unbelievable makeup skills.

Before all this international attention, the 31-year-old was most known for his acting, modeling and hosting. More specifically, he was known for one of his earliest hosting gigs on the television show “Eat Bulaga.”

Recently, his Instagram account has jumped up to nearly 500,000 followers and understandably so. In addition to photos of his adorable daughter Keira, his Instagram is filled with unbelievable makeup transformations. In fact, Ballesteros currently known as the man who can transform himself into any female celebrity using makeup.

That’s right. Looks like Michelle Phan has some competition when it comes to being the ultimate makeup guru. With the help of skilled contouring and wigs, he has transformed into Drew Barrymore, Beyonce, Miley Cyrus, Katy Perry, Julia Roberts, and even Ariana Grande. Needless to say, he looks nothing like the girls he transformed into.

Because of his interest in makeup, many who are unfamiliar with Ballesteros have questioned his sexuality. Apparently, he has never minded the question. After all, this isn’t the first time. He has portrayed many gay roles in the past causing fans to question his preferences. Ballesteros has confirmed that he is heterosexual and clearly, he has no problem going against the gender stereotype which says makeup only interests women.

Check out the transformations below! 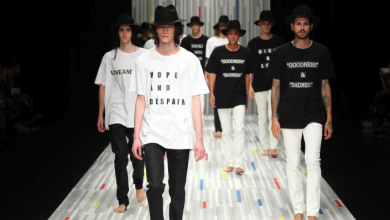 Designer Koji Udo continues with the tougher moto style trend while mixing in some military aesthetics and tailored fits for the FACTOTUM spring and summer 2015 presentation. The […]