These days, it’s hard to imagine any meal, in any corner of the world, where someone isn’t taking a photo of their food. Conservative estimates suggest that there are 40 billion images taken every single day and sometimes it feels like at least half of those are of a grain bowl or avocado toast. For most of us mere amateurs, the most we’ll fuss around with is finding a decent angle while hoping the lighting isn’t too dim. But for food stylist Sophia Chang, that final image might be the product of hours of set-up and problem-solving. “A lot of food styling is making sure the ingredients look their best and that the plate looks clean,” she says. “Sometimes it’s about working with the chef to fluff up a burger or to parboil noodles, which may not be as tasty or practical for a consumer.”

Chang describes her work as akin to “a makeup artist but for food.” Food styling has been around for decades but has become especially important in the social media age, where tantalizing images can help drive business to particular restaurants or brands—it’s become a fundamental part of culinary design and marketing. Who amongst us can’t relate to a moment where we see a dish online or in a magazine and think, “I want that”? That’s styling at work.

Like makeup or fashion shoots, food styling is often about presenting things in their most idealized version. Burgers on television, for example, always seem to look more sumptuous than what you get from a drive-thru window. Chang once had to shoot 40 baskets of strawberries. “We had to sort through all of them for the right sized strawberries, the right color and made sure there were no blemishes,” Chang says. “You probably won’t use 90 percent of the strawberries there, but you have to comb through all of them.”

On her gigs, part of her kit essentials are spray bottles filled with water or various cooking oils. A little spritz of water, for example, can make fruit or produce “look brighter, more inviting,” she says, whereas olive oil spray can create “bigger beads on the produce to make it look fresh.” Her goal is never to deceive—she doesn’t substitute mashed potatoes for ice cream, for example—but that doesn’t mean that you’d actually want to eat what she shoots. For example, if a client wants a shot of a nicely browned piece of steak, Chang says a common trick is to “use a blowtorch to fire it up so that [the exterior] will look brown enough to look cooked, and it doesn’t need to spend 45 minutes in the oven.”

Most food stylists take serendipitous routes into the field, and Chang is no exception. Her interest began to take shape at the University of California, Irvine, when she was an undergrad majoring in art and specializing in photography. After graduating, one of her first jobs was with a social media agency. “Most of their clients were consumer packaged goods, like healthy foods,” Chang says, and given her background in photography, the agency had Chang help out with the images for the marketing campaigns. “After leaving the agency, I decided, ‘I can do this on my own,’” she says. “I wanted to specifically focus on food styling, because it’s a lot of fun to be able to work with a lot of restaurants, meet restaurant owners and play with food, essentially.”

Chang didn’t have formal culinary training but she’s an avid home cook. Having some basic kitchen knowledge helps on the job, especially since time is the archfoe of food, e.g. melting, spoilage or wilting. Knowing how to pace a shoot, based on the ingredients, is essential. “A lot of places will use cilantro as a garnish and cilantro wilts fairly quickly,” Chang says. “If you set it out for an hour or so, it starts to look not as good, and you have to ask for a replacement.”

Part of Chang’s work involves more than just shooting single dishes. It’s also about helping clients shape their overall visual identity. She was recently in San Diego, working with a new eatery that serves churros and ice cream. “They wanted more of an urban, hip vibe, but not too pastel-y in color,” she explains. With that in mind, Chang shopped for props to fit the mood, including backdrops that used “distressed metals or wood.” “I grabbed certain trays to fit the right size of the churros or darker plates because they wanted to go for a darker feel rather than something light and modern,” she says.

And of course, since it involved ice cream, Chang had to worry about the melt factor. “A lot of times, we’ll work with a photographer to plan out the shot before the ice cream is brought out, because we can’t salvage it after it’s already melted,” she says.

Chang’s “training” came through a variety of informal channels. That includes everything from watching YouTube photography tutorials, to reading the food lab experiments of J. Kenji López-Alt, to apprenticing under more experienced colleagues. To Chang, being a stylist means “constantly learning, because it’s pretty much impossible to know everything.” Sometimes that even means watching Netflix shows like The Final Table or Street Food so she can understand “how chefs work in their element” which, in turn, helps her understand her clients and their processes.

Cultural competency also plays a role. Chang, whose family comes from Taiwan, worked with a financial institution that wanted her to create and shoot a bowl of beef noodle soup as part of an Asian Pacific American Heritage Month campaign. The dish is a Taiwanese staple and Chang noticed that the recipe they had given her called for brisket. “I asked them to change that because Taiwanese don’t use brisket for beef noodle soup,” she explains. “It’d be shank or some other really cheap cut that takes a long time to cook.” Other bits of knowledge that come into play include making sure that “chopsticks are never stuck in a bowl, straight up.” She’s even had “Korean clients that were very particular on the types of spoons, chopsticks and bowls they wanted for certain dishes.”

When Chang is cooking at home, she tries not to let her stylist tendencies take over when she plates something like breakfast. However, she says, “there are times where I think, ‘This could be a potentially good dish,’ and I just photograph it for myself so I can use it for a portfolio.” Likewise, in restaurants, she’s not above taking that ubiquitous meal snap … but only “if the lighting is good and the food looks enticing.”

On that note, Chang offers some tips to the amateur stylist on how to improve their food photos. “Natural lighting is always really great, especially if it’s a soft, window light,” she says. And if you’re shooting pasta, which can otherwise be “all beige or all red,” it helps to “add a tiny bit of garnish to add a different color,” to make the dish “look more elegant.”

Chang stresses that sometimes, a little chaos is preferable to sterile perfection. “Don’t be afraid of being a little bit messy, because that can add more character and fun to a dish versus having everything pristine,” she says. Chang does make one exception, though: “If you’re serving sushi, that might not be something you want to look messy.” 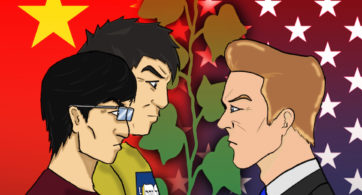 INTRODUCTION Editor’s note: For each issue, we choose an unproduced screenplay and present it to you as a one-page description of the proposed movie. A talented and promising illustrator […]