The original idea for the “Food For Thought” column stemmed from my interest in how Asian Americans play into contemporary food culture. This is anything but a new phenomenon. The Asian influence in American cuisine goes at least as far back to the 19th century California Gold Rush era, but with the acceleration of food(ie) culture in the 21st century, Asian Americans are as visible as ever. Food feels like one of the few American pop culture lanes where our presence isn’t met with immediate skepticism or scorn. After all, more so than on band stages or basketball courts, seeing an Asian face in a restaurant kitchen is so familiar it almost feels pedestrian.

Exploring this topic via the oft-overlooked literary form of the cookbook felt like a novel approach. After all, as I wrote in my recent column profiling the folks who run Los Angeles’s beloved Chinatown cookbook “store Now Serving, there’s been a wave in recent years of Asian American authors publishing recipe books that make bold statements about identity and community through a culinary lens. A year later, and I’m only further bolstered in this belief. The Asian American cookbook that goes beyond grandmother recipes and old school Americanized restaurant favorites—not that there’s anything wrong with those—is not a fad. As more people from our community use the world of food to pursue professional and creative ambitions, I expect that future store shelves will feature a section devoted not just to “Asian cuisine,” but also “Asian American cuisine.”

All this said, in tackling the column and feeling obliged to actually cook out of the books I was reviewing, I realized I was also slowly changing my own relationship to Asian cuisine. If you spin back to the early 2000s, my now-wife Sharon likes to joke that I used to have a “one-pot kitchen” because the only cooking utensil I owned was a beat-up pot with half of its non-stick surface flaked off. Even then, I mostly only used it to heat water for instant ramen. Had our early romance been predicated on my culinary skills, we would have been doomed from the start.

When we moved in together a couple of years later, prior to the birth of our daughter, I had a more flexible work schedule and began to take over most of our meals. In the beginning, it was almost all “Western” food, i.e. basic Italian pastas, pan-fried chicken breasts, a recipe from my sansei mother-in-law called “Mexicali macaroni.” As much as I liked Asian food when I went to restaurants, I never learned how to cook any of those dishes growing up; the only vaguely Asian ingredients I had in the house were soy sauce and short-grain rice.

Even after 2010, when I moved back to the San Gabriel Valley—the unofficial capital of Asian eats in America—I wasn’t immediately spurred to action. But thanks to some good-natured ethnic shaming by some fellow Chinese American friends (shout out to Patrick and Leonard), I decided after turning 40 that enough was enough. I bought a wok off of Amazon and slowly began to learn basic recipes out of cookbooks like the popular “Lucky Peach Presents 101 Easy Asian Recipes.”

However, once the plans for this column were set over a year ago, I knew I had to push myself to embrace more than just the easy or familiar. Without sounding too self-congratulatory, I’m amazed that, so far, I’ve tackled Chinese, Japanese, Korean, Laotian, Thai, Vietnamese, Indian, Hawaiian and Asian fusion cuisines. The execution has been anything but flawless, but all cooking is a trial-and-error process. What was important wasn’t how well I could perfect a dish, but that I was willing to try. In the process, I’ve learned about techniques and ingredients that I hope will become part of my culinary subconscious, enabling me to go from following recipes to free-styling dishes that draw on multiple traditions.

This, to me, is one of the essences of Asian American cooking: combining flavors and ingredients that don’t draw from any single heritage but from many, reflecting the ways in which our community has long built from constant interaction and collaboration across ethnic lines. I’m nowhere near being able to whip together syncretic dishes on the fly, but I’ve learned enough so far to pass along the following pieces of advice to all the home cooks out there willing to start trying.

1. Invest in your pantry. What makes a Vietnamese dish “Vietnamese,” for example, is often dependent on distinct flavors, like the perfumed touch of lemongrass or the umami-bomb of fish sauce. Filipino cooking often requires access to at least three or more kinds of vinegar. Chinese cooking regularly calls for both light and dark soy sauce, each with its own distinct coloring, salinity and impact. You can never have enough garlic, green onions or ginger on hand, but you may also want to keep small jars of star anise or chile paste around, because you never know when you’ll want to add them to a braise or stew base. Beefing up your pantry isn’t exorbitantly expensive, but it does require room and some decent organization, lest you end up unloading an entire cabinet just to figure out where you left your coriander seeds.

2. Mise en place is one of your best kitchen aids. This French cooking concept simply means to have as many of your ingredients as possible prepped and in place before cooking. When I’m lazy, I just start on a recipe, assuming I can prep ingredients while, say, the water is boiling or some aromatics are being fried. However, as I’ve learned, time and time again, this is almost universally a bad idea because it’s easy to get lost in the weeds when you’re multitasking. Cutting onions will take longer than you anticipate, or you realize that you missed a browning step. Spending the time to get your mise en place in order may feel time-consuming, but it makes the overall cooking process so much smoother and more efficient in the long run. It’s worth that extra 15 minutes on the front end to get the prep done. Bonus protip: If you have a significant other, try working on the mise en place together. Prep work is easier to split between two people, especially if there’s no hot stove involved yet. Plus, couples who cook together, stay together. Maybe.

3. Embrace the unknown. As I was saying earlier, pushing myself out of my comfort zones often yielded the most pleasant surprises. Case in point: I love Vietnamese food, but had never tried cooking the cuisine until I picked up Andrea Nguyen’s new “Vietnamese Food Any Day: Simple Recipes for True, Fresh Flavors.” Specifically written for home cooks like me, Nguyen tries to simplify the number of ingredients and steps needed to execute a range of classic dishes, like a comforting bowl of phở gà or quick-and-easy lemongrass pork chops.

I had never cooked with coconut water before, and now I’ve used it in everything from charred Brussels sprouts to turmeric jasmine rice to “coconut-kissed chicken.” I rarely cook with tofu, but was intrigued enough by Nguyen’s “shaking” tofu recipe to give it a whirl, and that turned out to be a family hit. As I’ve learned, your skill level in the kitchen is less important than embracing your curiosity to try new things. Your meals—and palate—will be richer for it.

If my tone hasn’t given it away yet, I’ll be stepping away from “Food For Thought” for a while so I can work on other projects, one of which is still very much connected with Asian Americans and food, and one that you, dear reader, can participate in. Along with Dr. Mike Nguyen of the University of Denver, we’ve been putting together a survey to explore second-generation (and beyond) Asian American eating habits at home and in restaurants. What we want to know is how often those of us raised in the U.S. make it a priority to eat Asian meals in our everyday lives, whether we’re cooking at home or finding a place to eat out.

Surprisingly, this kind of basic research doesn’t seem to have been done before. Existing studies have focused on how first-generation, ethnic-specific immigrants have changed their diets and what the epidemiological outcomes have been. That’s important health research, but what we’re interested in is how food shapes identity amongst Asian Americans of all backgrounds. How often do Cambodian Americans eat, say, Thai food versus Korean food? How often do Filipino Americans eat Filipino food at home or in restaurants? These are all questions that many might have pet theories for, but we’re trying to collect some preliminary data via this pilot study. If you want to take part, just go to apifoodsurvey.us​

And with that, thanks to “Character Media” and former Editor-in-Chief Serena Kim, for letting me write this column. Thanks to Now Serving for all their wonderful cookbook recommendations. And thanks to you, dear reader, for accompanying me on this little adventure. I hope to return when I can, but until then, be well and eat well.

Oliver Wang is a professor of sociology at CSU-Long Beach and co-hosts the music appreciation podcast, “Heat Rocks.” 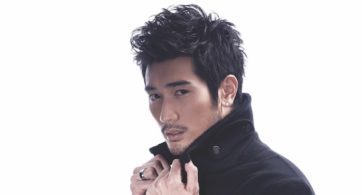 Previously only visible in select shows and campaigns, Asian models are now a permanent fixture in most big fashion shows. Whether that’s because Asians have repeatedly shown their buying […]