Often lost in the hand-wringing over Asian American “outmarriage” rates is that the fastest growing pairings are actually intra-Asian American: Chinese/Filipino, Korean/Thai, South Asian/Japanese, etc. This is especially true amongst U.S.-raised Asians who tend to encounter each other in their neighborhoods and schools. In my own life, not only am I a part of such a pairing—I’m second-generation Chinese American, my wife is fourth-generation Japanese American—but in our circle of friends, we know more pan-Asian couples than either interracial or same-Asian couples.

As our households blended, so did our food traditions. For an ever increasing number of children, having pancit for lunch and laksa for dinner wouldn’t seem unusual. For Cynthia Chen McTernan, who rose to prominence with her recipe blog, “Two Red Bowls,” this is precisely the environment her Chinese/Korean/Irish son is growing up in. She writes, “In my little guy, I see a mix of cultures that is both incredibly diverse and utterly American.” Her debut cookbook, A Common Table, deploys a title meant to capture the culinary influences that circulate in her home, including Chinese, Korean, Southern and Hawaiian cuisine.

To be clear, McTernan’s 80-plus recipes are far more personal than they are sociological. There’s no strong, common thread linking recipes together within “A Common Table” beyond the author’s life story. She draws inspiration from various memories, from childhood—My Great-Grandmother’s Lion’s Head Meatballs—to her own contemporary concoctions such as White Peach and Lychee Cake. Though her recipes are accessible enough for most home cooks, “A Common Table” isn’t a primer for pan-Asian cooking. For every recipe you might expect to find—Shanghainese Cucumber Salad or Pork Bulgogi—there are others that drop in from left field, like Chinese Cola Chicken Wings or a traditionally Italian preparation of Pappardelle with Lamb Ragù.

Compared to other cookbooks with a more formal organization, “A Common Table” works best when you’re just rifling through, seeing which recipes catch your eye. At least, that’s how I ended up trying out McTernan’s Spicy Braised Lamb With Radishes and Noodles, a noodle soup dish that turned out to be perfect for the cold and rainy weather that soaked Los Angeles last February. After a few hours braising in the oven, the dish yields soft, translucent radish bulbs and tender strands of lamb that fall off the shank, while spoonfuls of chili garlic paste mellow into a savory soup base with a soft, spicy edge, but is far from being a capsaicin bomb. For what it’s worth, when my immigrant parents tried it, they were slightly incredulous I made it: “I didn’t think American-born Chinese had much of a taste for authentic Chinese food,” my mom said. That felt like a backhanded compliment, but, OK mom, whatever.

I was similarly pleased by McTernan’s Char Siu Pork recipe, which I made with pork neck, my favorite cut of pork that no Western supermarket seems to ever carry (shout out to 99 Ranch for stocking it). It didn’t end up resembling the red, glistening strips you see in Cantonese deli windows, but the familiar flavors of five-spice and caramelized sugar still shone through. I also became an instant fan of the Friday Night Kimchi Fried Rice, which is not only the ultimate comfort dish (especially with a runny fried egg laid on top) but it’s also one of those rare dishes where ugliness feels like a virtue.

Though “A Common Table” includes a number of Asian fusion dishes—think Kimchi-Brined Spicy Chicken Biscuits and Collard Wontons—I was hoping to see more inter/pan-Asian creations that capture the kind of blended households that McTernan, myself and so many Asian Americans have started. Perhaps that’s a task awaiting the likes of McTernan’s son or my daughter, who’ll grow up thinking that gochujang, mirin, hoisin, black sesame, matcha and pandan go together as naturally as peanut butter and jelly.

For the past 50-plus years, Asian Americans have been amongst the most dynamic of all ethnic groups in the U.S., constantly transforming via immigration, intermarriage and relocation. As much as concepts like “authenticity” and “tradition” are associated with our food ways, our communities and our palates, they aren’t trapped in amber. Our common tables have long set out seats for people of myriad backgrounds. As our shared kitchens reshape themselves to accommodate those tastes, we’re on the cusp of a wave of new culinary movements awaiting development and discovery. 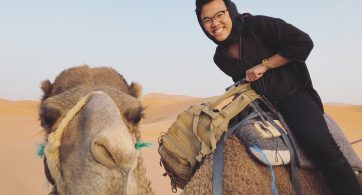 Picture this: You’re bathed in the dim lights of the karaoke bar. Your friend is cry-singing along to “Tong Hua.” Suddenly, you feel it. Your face is hot and […]