Picture this: You’re bathed in the dim lights of the karaoke bar. Your friend is cry-singing along to “Tong Hua.” Suddenly, you feel it. Your face is hot and you’re struggling to breathe. That creeping, blotchy crimson blush of too many downed sojus is back again.

Everyone knows that Asians are no strangers to throwing down. But at least 36 percent of the East Asian population is plagued by Alcohol Flush Reaction, a.k.a. the Asian flush. Now there’s a game that celebrates all those things that make Asians unique, that sometimes embarrassing bloom of rosiness notwithstanding.

Inspired by Korean drinking games, AZN Flush is the self-proclaimed “wildest drinking card game this side of Koreatown,” created in 2018 by entrepreneur John Lim. After graduating from college in 2016, Lim just couldn’t seem to land that much-prized first full-time position. So, he decided to teach abroad in Korea and eventually picked up some work in digital marketing. He went on to co-found his own digital marketing firm, Ansel, which aims to support companies with a positive social or environmental goal. In addition to his noble professional pursuits, Lim is also a passionate card game enthusiast.

“I have seen so much support for Asian American communities over the past year,” Lim said. “Even just looking at Crazy Rich Asians and seeing how well people responded to that. [A card game] felt like a natural extension, and I wanted to try my hand at it.”

Each pack of AZN Flush is comprised of 110 cards and can be played with anywhere from two to 20 people. According to the AZN Flush website, “The rules are on the damn cards.” Each card contains an instruction, like: “If you were pre-med, take 4 sips,” or “Whoever has the most glorious Asian flush gets to pick one person to share their Tinder profile with the group.”

Most of the inspiration behind the game comes from Lim’s own experiences. Despite the fact that it’s a light-hearted drinking game, Lim sees AZN Flush as a way to use laughter to cure old, angst-filled wounds. “Some of this stuff you can joke about now, but at the moment it caused a lot of stress,” Lim said. “Like, ‘What am I going to study in college?’ Or even something as funny as getting spanked by slipper. These were things that were real issues for us [in our pasts], and I’m sure still affect us to a certain degree today. If you can laugh about whatever you’re going through, it makes it less powerful.”

Whatever poison you pick, AZN Flush is sure to get players laughing their asses off “with the finest luxury, handmade, cage-free memes” printed on cardstock. Hopefully it will be the only kind of flush causing shortness of breath the next time you’re swaying the night away at noraebang. 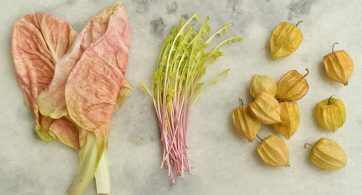 When Aaron Choi first saw the little plot of land in San Diego County that would become his family’s farm, he realized he would have to arm up for […]