After being ousted as Hawaii’s Republican Minority Leader following her criticism of President Donald Trump, State Rep. Beth Fukumoto is now considering defecting to the Democratic Party. If she leaves, Republicans will only have five remaining members in Hawaii’s legislative session.

Formerly the country’s youngest female caucus leader, Fukumoto had been the Minority Leader in the Hawaiian State House of Representatives since 2012. She identified herself as a moderate conservative and has been a vocal critic of Trump in the past.

Following her ousting, Fukumoto is now considering defecting due to the GOP’s refusal to tolerate disagreement. “Their argument was that you’re a bad Republican if you dissent,” said Fukumoto to NPR. “What’s the point of being in a political party that can’t have conversations? It’s not so much about leadership. It’s whether or not this political party is willing to make itself better. And I don’t think that it is.”

Fukumoto is currently undecided on whether she should defect, citing a need to represent the constituents who had voted her into office as a Republican. On Feb. 1, Fukumoto sent a letter to her constituents, asking for their opinions.

“It is my belief that I can no longer remain a member of a party that punishes dissent,” Fukumoto said in her letter. “I have always said that we should work to find common ground, even when we disagree, but powerful voices in the Republican Party continue to fight against compromise.”

Fritz Rohlfling, the chair of Hawaii’s Republican Party, has encouraged Fukumoto to stay, although if she decides to defect, he has requested that she resign and run as a Democrat. Rohlfling also defended Fukumoto’s ousting, claiming that House members had the right to expel leaders based on their public statements.

State Rep. Andria Tupola, who will be replacing Fukumoto, also defended Fukumoto’s removal from power. “When you step up as leader, and you represent a variety of voices, it’s important that you represent all voices,” Tupola told KITV. “Sometimes you have personal opinions versus what the group thinks, and the group wanted to make sure that was being presented.”

Fukumoto was voted out as minority leader by the Hawaii State House on Jan. 31, less than two weeks after criticizing Trump at Hawaii’s Women’s March. There, she accused Trump of using racist and sexist rhetoric during his campaign. Within 24 hours, Fukumoto was receiving calls for her resignation, and her caucus was considering removing her from power.

Fukumoto defended her comments on the floor, asserting that the party was wrongfully trying to pressure her into silence. “They told me they would keep me in this position if I would commit to not disagreeing with our president for the remainder of his term,” Fukumoto said. “Mr. Speaker, I am being removed as I refuse to make that commitment. I believe as Americans, and members of this body we have a responsibility to criticize power when power is wrong.”

In regards to her colleagues’ accusations that Fukumoto had failed to represent her constituency, Fukumoto defended herself by citing Trump’s poor standing amongst Hawaiians, who voted decisively for Hillary Clinton.

“Republicans here need to be standing up and saying President Trump and the national Republicans and the direction they’re going don’t represent our state or our people or our voters,” Fukumoto told NPR. 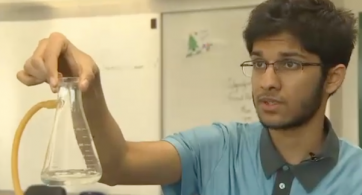 World, keep an eye out for Chaitanya Karamchedu, a senior at Jesuit High School in Oregon. From his school lab, the teenager has discovered an inexpensive method to make […]