Takei — who plans to deliver the petition signatures to both the government and the Muslim Public Affairs Council in person as a sign of support — wrote on the Care2 petition about his family’s internment during World War II, a time when a presidential executive order called for Japanese Americans to be rounded up and put into camps without due process.

“During that time, fear and racism drove government policy, creating a living hell for over 120,000 innocent Japanese Americans, most of whom were U.S. citizens,” Takei wrote. “I have spent my life trying to ensure something like this never happens again. But dark clouds once more are gathering.”

Takei wrote he wants to “send a message to Trump and his ilk that this will never again happen in America.”

Trump, who included suspending immigration from “terror-prone regions” during his 100-day plan, has also been criticized for his supporters’ calls for a Muslim registry.

According to Takei, a former spokesperson for a major PAC backing Trump said the former mass internment of Japanese Americans set a “precedent” for the president-elect to follow with plans to create a registry.

“It starts with a registry, with restrictions, with irrationally ascribed guilt, and with fear,” Takei wrote. “Be we know well where it might lead. If it is freedom and our way of life that we fight for, our first obligation is to ensure that our own government adheres to those principles. Without that, we are no better than our enemies.”

“National security must never again be permitted to justify wholesale denial of Constitutional rights and protections,” he said. 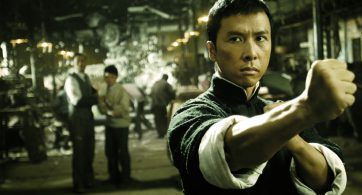 You may only recognize Donnie Yen as “Star Wars: Rogue One”‘s Chirrut Imwe, the Force-driven (if not exactly gifted by the mystical power), blind Jedha warrior-monk. He’s easily one of […]